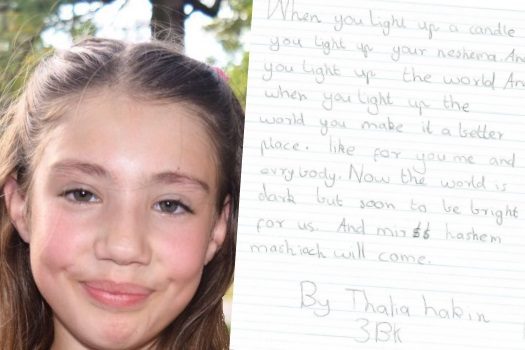 “NOW the world is dark, but soon to be bright for us.”

When she wrote those words in late 2015, Thalia Hakin, who was tragically killed last Friday in the attack in Melbourne’s Bourke Street Mall, could not have imagined just how dark the world would soon become for her family, her community and, indeed, the whole of Melbourne and Australia.

Written between Rosh Hashanah and Yom Kippur as part of a worldwide competition aimed at bringing Jewish women together, entrants were asked to share their thoughts on lighting Shabbat candles by the organisation Jewish Girls Unite (JGU).

“Now the world is dark but soon to be bright for us. And im yirtzeh hashem [God willing] mashiach [the messiah] will come.”

Next month, Thalia’s words are due to be published in a book published by JGU, called One More Light.

Susan Axelrod from JGU said the book has been blessed with the words of an angel.

“We will publish this entry and forever honour the soul of this Jewish daughter,” she told The AJN.

“God knew, though we did not, that the words she wrote on the day she submitted her entry would be immortalised in this book.

“We love her and she will always be a precious member of the JGU family of girls around the globe.”

Last Friday afternoon, the young Beth Rivkah Ladies College student and her nine-year-old sister Maggie were at the Bourke Street Mall with their mother Nathalie when Dimitrious Gargasoulas allegedly drove off the road and killed five people, including Thalia. Maggie has sustained serious injuries and is recovering, but Nathalie remains in a critical condition in hospital.

Chabad McKinnon Jewish Centre, where the Hakin family are members, wrote to the community this week.

“Thalia was snatched away from us in the tragic events which took place in the Melbourne CBD on Friday, which claimed four other innocent lives.

“It is heartwarming to see how there has been such an overflow of goodness from the entire Jewish community, to help support the Hakin family in this most difficult time.

“The family has told us that they really appreciate the community support, and it means so much to them, but for now they are being looked after by the hospital and close family. They will be needing help mostly after they leave the hospital please God very soon.”

The centre said there are three ways to help the family: say tehillim (psalms), drop off cards or gifts through the Chabad House for the family, or donate money through a MyCause campaign, which has already raised more than $90,000 for the family.

Pekelach, the Mizrachi Charity Fund and Beit Rafael have also come together to help people drop off cards and gifts for the family.

Mizrachi Charity Fund coordinator Avital Seifman said that not everyone can give money, but people just want to help and do what they can.

“The family need love and support,” Seifman told The AJN.

“People dropped off nail polish, presents, cards, food, games and anything else they could.

“When Maggie woke up, for example, she wanted mangoes, so we made sure that we included mangoes in the pack for her.”

In Thalia’s words, “Now the world is dark, but soon to be bright for us.”

It falls to us in this time of darkness to help bring what brightness we can to the loved ones she has left behind.

Cards for the family can be dropped at the front gate of 81 Balaclava Road in North Caulfield, or to donate through the MyCause campaign, go to www.mycause.com.au/hakinfamily. 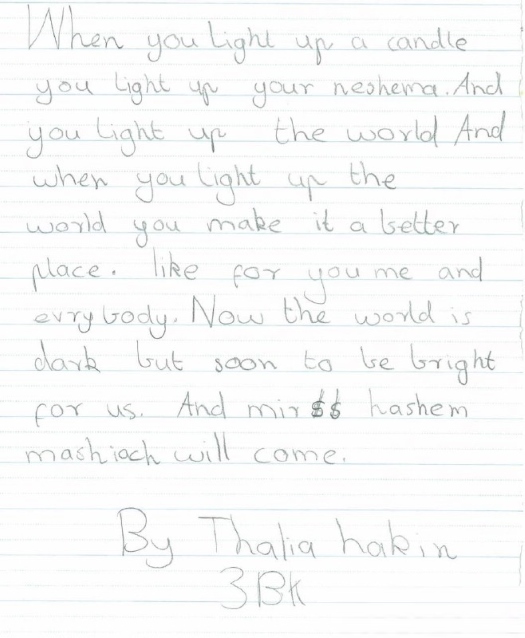