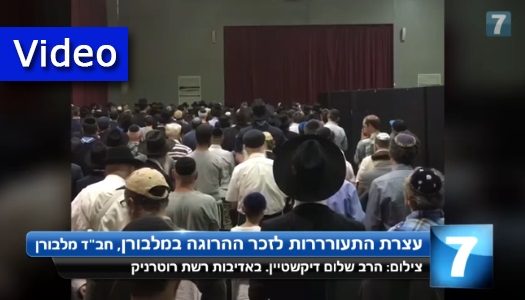 Five hundred members of Jewish community of Melbourne held a memorial service on Sunday in memory of 10-year-old Thalia Hakin, who was killed on Friday in a ramming attack in Melbourne.

Melbourne Chabad emissary Rabbi Shalom Dickstein spoke to Arutz Sheva and said the Jewish community was holding the memorial in order to support the devastated family and to arouse Heavenly mercy for Thalia’s mother and sister, who are still in the hospital.

Thalia’s mother was severely injured, and her 9-year-old sister was lightly injured in Friday’s attack.

According to Rabbi Dickstein, the community is having an extremely difficult time accepting the fact that the Melbourne police refuse to recognize the ramming attack as a terror attack, despite the terrorist’s calls of “Allahu akbar!” However, he said the community has trust in the authorities.

“Despite this, the community still stands behind the police,” Dickstein said. “We believe that if the investigation shows the ramming attack was indeed a terror attack, there won’t be any cover-ups. Australian authorities have proven they know how how to properly deal with terror, and that they do not conceal the true facts.

“Thalia is remembered as a happy, smiling girl. Her sister, who was wounded in the attack, is in my daughter’s class. They’re friends. It’s very hard to tell children about what happened.

“Here in Australia, we’re far away from everything. All the terror attacks we’re used to seeing in Israel hardly every happen over here… It’s not simple and we’re doing our best to deal with it,” Dickstein concluded.