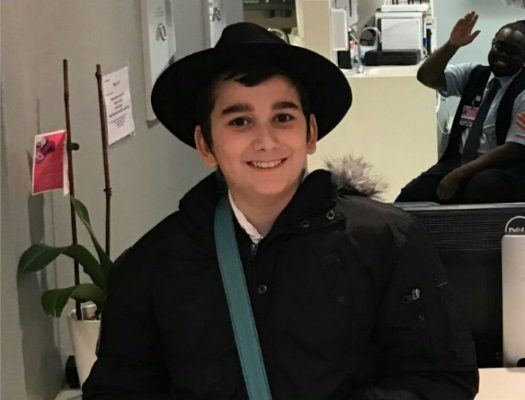 Shneur Zalman Boaron bids farewell to the doctors and staff who cared for him as he is discharged on Friday.

In what cannot be described as anything short of an open miracle, Shneur Zalman Boaron, a 13-year-old boy who was critically injured and in a coma for a week after he was struck by a vehicle while crossing Kingston Ave. on his way to school early last month, has been sent home from the hospital in good health just in time for Shabbos.

The accident had sent Shneur Zalman into a coma, which he woke up from one week later (see video below). His speedy recovery has been nothing short of miraculous, his parents and doctors say.

Shneur Zalman’s first stop after leaving the hospital on Friday was at the Ohel, where his father had prayed for his recovery almost daily during his 6-week stay at the hospital, and where Shneur Zalman personally thanked the Rebbe for his blessings.

“We thank Hashem for the revealed miracles and the abundant kindness he has shown us, allowing us to welcome home our dear son healthy and whole,” his parents said.

The parents also thanked all those around the world who had diligently prayed and said Tehilim on his behalf.