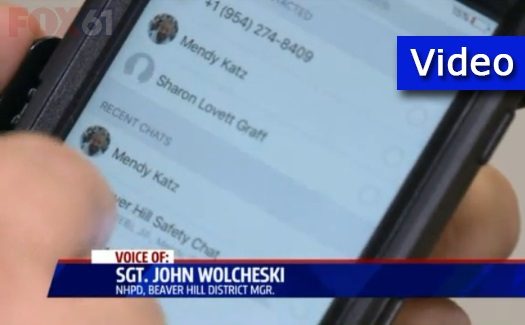 Residents of New Haven, Connecticut, feel much safer these days amid the rising popularity of a Whatsapp group that keeps tabs on the neighborhood’s safety and keeps police in the loop about any criminal or suspicious activity. The group was founded a year ago by Lubavitcher resident Mendy Katz, and already boasts over 500 vetted participants, including many police precincts.

The New Haven Police Department has long taken pride in its efforts to connect to the community through community policing. Now, cops have a way to expand this initiative through the use of smart phones.

Several New Haven neighborhood groups have come together to report crimes and suspicious activities, through a group chat app called WhatsApp. And many of the managers of New Haven’s police substations are being invited into these groups for quicker response to crimes, which police say is getting would be crooks a bit paranoid.

“Inside that house it might be somebody watching me put this information out to the police or that person sitting in the car over there might not be listening to the radio. They might be telling somebody what I’m doing,” said New Haven police Sgt. John Wolcheski, the Beaver Hills District Manager. ”