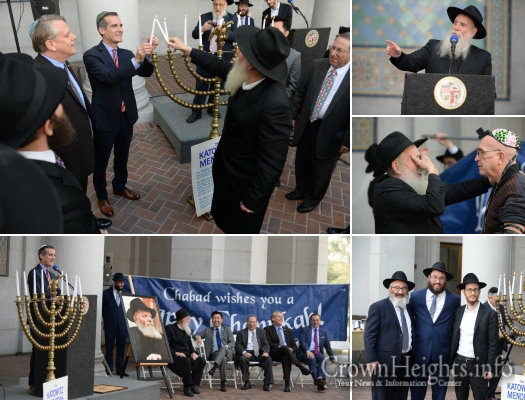 On Tuesday, Yud Daled Kislev, a memorable celebration in preparation for Chanukah took place at Los Angeles City hall, the seat of power of the second largest city in the United States. In attendance was the head Shliach of the West Coast, Rabbi Boruch S. Cunin, the Shliach to Downtown Los Angeles, Rabbi Moshe Greenwald, the first Jewish mayor of the city, Eric Garcetti, and many other city officials and dignitaries.

The master of ceremonies of the event was Rabbi Moshe Greenwald, who began the ceremony with words of encouragement for the people of Israel, and California.

Rabbi Boruch S. Cunin followed by relaying the Rebbe’s powerful words of hope and reassurance in times of challenge and distress and by explaining the significance of the Chanukah lights during times like today. Rabbi Cunin was also careful to mention that Chanukah does not begin until next Motzei Shabbos and today is only a celebratory reminder for Jews to prepare themselves for Chanukah.

Mayor Eric Garcetti stressed the lesson of perseverance learned from the Maccabees. He also noted that his ancestors came from the same Polish town of Katowicz, where the Menorah used at the ceremony originated and was rescued during the Holocaust from the famed Synagogue of that town.

A special Menorah, designed by the famous Los Angeles artist Andre Miropolsky, was on display during the ceremony. Miropolsky has created numerous works of art, both public and private, across the world.

All in attendance were treated to a special presentation by the Kol Yaakov Yehudah Boys Choir, led by Rabbi Mendel Duchman and his son Yakov Yehudah Duchman. The children were superb as they sang classic Chanukah songs and brought joy to the City of Angels.

This 34rd annual Menorah Lighting at the Los Angeles City Hall was organized by Chabad of the West Coast led by Rabbi Boruch S. Cunin, Rabbi Moshe Greenwald of Chabad of Downtown and Rabbis Shalom Dovber Cunin and Dovid Lieberow of Chabad in Westwood.