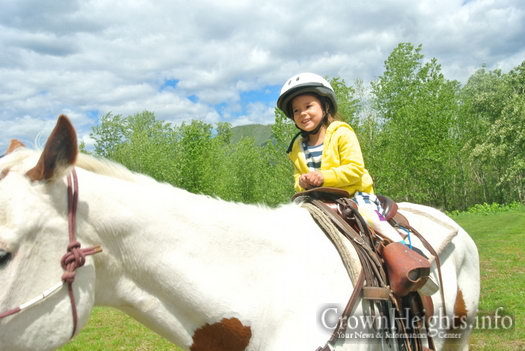 Shliach to Montana Rabbi Chaim Bruk took to the pages of the Huffington Post to describe what it’s like to raise his special-needs daughter, Zeesy, who has GLUT-1 Deficiency, a disorder so rare that she is the only person known to have it in the entire state of Montana.

The phone rang, it was my wife Chavie, I knew she was calling with an update, but it was not one I was hoping for. “The neurologist is pretty certain that he has a diagnosis, but we will get more testing when we’re back in Montana” she said. My heart stopped, my mind raced, shivers went up my spine; I was shocked. I knew her voice, and I knew that this wasn’t good news.

Just after our daughter Zeesy’s first birthday, she suffered her first grand mal seizure. Optimism is ingrained in our Chassidic culture, so we were extremely hopeful that this would pass, as it does for many infants, but time didn’t heal our Zeesy. While she grew in so many ways over the next three years, she struggled with so much that other children her age take for granted. Walking, potty training, speaking, sleeping through the night, were all challenging for our baby, but most of all, she was having intolerable meltdowns that by all standards were more like semi-seizures or blackouts.

Our family’s remarkable pediatrician, Dr. Sheila Idzerda, worked tirelessly to evaluate Zeesy’s condition, but with no permanent pediatric neurologist in Montana at that time, we were at a loss. In November of 2014, with the help of dear friends, we discovered a one-of-a-kind pediatric neurology center in New Jersey and secured a three-day, total evaluation appointment for Zeesy. Chavie traveled to the Garden State, while I held down the fort with the other two children in Bozeman.

During their visit, there were so much the specialists discovered about Zeesy, so much we wished we would have known years earlier. Yet, such is the world of child development; it can take time to figure it all out. In my heart of hearts, I was still hoping it would be “nothing”, or at least an “easy fix”, but that wasn’t in the cards for us.

Chavie called again from Jersey that evening and started using terms like “genetic disorder” and “genetic testing”; I didn’t know what exactly it meant but I felt like I was punched in the gut. My daughter, our second child, now has special needs? As Chavie spoke, I was in a daze, not fully grasping, or even hearing, everything Chavie was sharing, but I got the point: No cure. Very rare condition. Our life is about to change forever.

After returning home, Zeesy underwent genetic testing at Shodair Children’s Hospital in Helena and a spinal tap in Billings. The result of it all was conclusive: Zeesy has Glut-1: “Glucose Transporter Type 1 Deficiency Syndrome is a genetic disorder that impairs brain metabolism. Glucose isn’t transported properly into the brain, leaving it starving for the energy it needs to grow and function.

Like most parents, the love Chavie and I have for our children is immeasurable. Adopting a child creates a bond between parent and child that is truly indescribable. Yet, to be frank, I never wanted or planned to raise a special needs child. When asked “do you want to adopt a child with special needs”? I’d say “I admire those that are, but it’s not something I’m up to”. Yet, here I was, raising a child with a very rare disorder only found in five hundred people worldwide. I wasn’t raising Zeesy because I thought I was cut out for it; I was doing it because G-d knew that Chavie and I were.

I’m not a perfect parent, not by any stretch of the imagination. I struggle. I strive to be calm and thoughtful 24/7, but don’t always succeed. Yet, Zeesy has made me a different dad. I have more patience, more understanding, more compassion, more strength and more love. I am not only a better father to Zeesy and her siblings, but I am a better husband, better rabbi and, I believe, a better human being because of our Zeesy. I am less judgmental of other parents, I’m more reverent of parents dealing so well with their special children and I am more accepting of life’s curve balls than ever before.

Zeesy revealed a part of me that I never knew existed.

While there is still no cure for Glut-1, there is a remedy for development: the ketogenic diet. Unlike, a health or body image diet, this is lifesaving. Chavie, with boundless patience and love, prepares Zeesy’s measured meals, so that her delicate brain receives an alternate source of energy, starving it from the normal glucose based energy and giving it high fat energy. In the eighteen months since Zeesy started this diet, she has grown and developed exponentially, but the workload is enormous. Zeesy attends Bozeman Montessori school, where the education is incredible, she’s treated with occupational and physical therapy, and takes multiple medications and vitamins for her wellbeing. So, while waiting for the miracle pill, she’s certainly going places.

Chavie and I look at each other every day and thank G-d for Zeesy. Zeesy has taught us that together we can persevere and thrive for her, for her siblings, for ourselves and for the world around us.