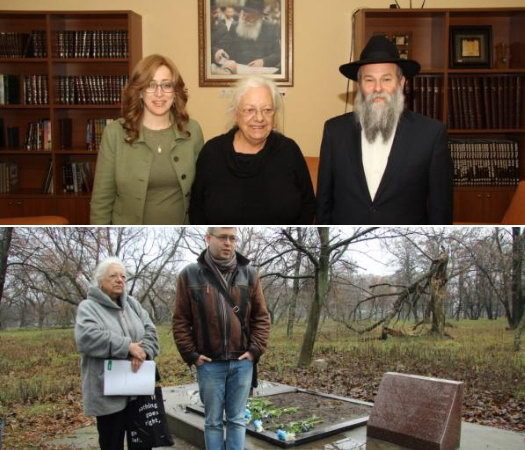 Dnepropetrovsk’s Chief Rabbi Shmuel Kaminezki and his wife Chana received a delegation from Germany that came to pay tribute to the victims of the Holocaust killed at the Igren Hospital during WWII.

The recent discovery of archived documents and personal testimonies about the wholesale murder of patients at the hospital restores a picture of horror. This is where, 76 years ago, Dov Ber Schneerson, the brother of the Lubavitcher Rebbe, was murdered at age 38.

Mrs. Lilo Bhatia, the daughter of the German officer responsible for the murder of the Rebbe’s brother and the bloodshed at the hospital, came to ask forgiveness for her father. She visited the mass grave and the Dov Ber Schneerson memorial on the premises of the hospital and met with the leadership of the Jewish community.

Rabbi Kaminezki spoke to the delegation about the Rebbe and his lifelong work to revive Jewish life after the Holocaust.