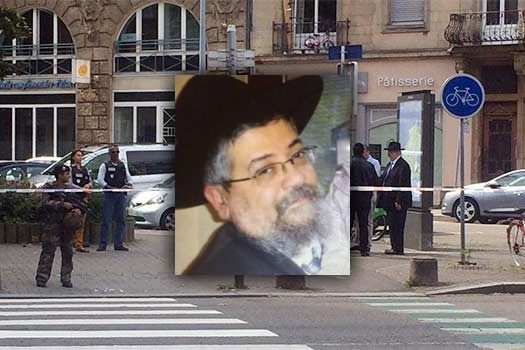 The Jewish man who was stabbed last Friday by a knife-wielding Muslim assailant shouting “Allahu Akbar” in the northeastern French city of Strasbourg is home from the hospital, doing fine physically, but emotionally traumatized, his daughter told The Algemeiner on Wednesday.

Sterna Moyal said that despite the attack on her 62-year-old father Shalom Dovber Levy, members of Strasbourg’s Jewish community would continue to live their lives without fear.

“I don’t think people will be scared, because we have no choice,” she said.

Moyal recounted in detail to The Algemeinerthe terrifying experience her father survived.

“It was a Friday morning and my father was at home,” Moyal said. “He doesn’t work anymore, so he was studying. And my mother needed some stuff for Shabbat. We have a kosher shop close to the house. So my father went there to buy something and on his way back home a guy came up behind him. My father didn’t see him coming. The guy put his arm around my father’s head. My father saw only the eyes of the guy, who screamed ‘Allahu Akbar’ as he put his knife inside my father’s stomach.”

Moyal continued: “My father told me that he didn’t feel pain at that moment. The guy then took the knife out and wanted to stab my father again. At this moment, my father realized it was best for him to run, even as he was bleeding all over, because if he didn’t run and just lay on the ground, he would have been killed. So he ran, and in front of our house there is a cafe, where our neighbor was sitting and reading. He saw my bleeding father running with someone behind him with a knife. The neighbor took my father and put him on a chair and called the police.”

The surprising part of the story, Moyal said, was that the attacker wanted to be arrested. “The Muslim guy did not try to escape from the police,” she said. “He just stood there. It was like he didn’t mind getting caught because he had done what he was supposed to do. These people are ready to die to kill a Jew, so they don’t mind being arrested or killed. So the police came and he was like, ‘Ok, you can take me.’”

Moyal, who is one of Levy’s 12 children, said there was “no doubt” that the attacker was motivated by antisemitism. In the wake of the attack, police ruled out terrorism and blamed the assailant’s mental problems.

“These days, it’s easy to just say, ‘He’s crazy,’” Moyal said. “First of all, it’s true, you have to be crazy to want to kill somebody. So the guy is crazy. But when you look at my father, there is no way to not know that he is a Jew. He has a beard and wears a kippah. And you don’t scream ‘Allahu Akbar’ if you’re just trying to kill anyone.”

In fact, the 45-year-old attacker assaulted another kippah-wearing Jew with an iron bar in Strasbourg in 2010. After that incident, he was found to be mentally unstable and placed in a psychiatric hospital. According to Moyal, he was released two years later.

“My father asked the police, ‘How did you let this man out?’,” Moyal said. “And they just answered, ‘Oh, because we had no place.’ Its unbelievable they let this man go out and didn’t think it was dangerous.”

Moyal said her family is “very angry” and she vowed to “hire a good lawyer and make sure the attacker stays in jail for life.”

It appears that the local prosecutor agrees with Moyal’s belief that the attack was spurred by antisemitism, as the attacker was indicted on Saturday for “the attempted murder of a victim because of his real or inferred race or religion,” AFP reported.

Moyal, born and raised in Strasbourg, but currently living in Switzerland, said life would go on as normal in the Strasbourg Jewish community, which numbers around 15,000 people.

“It is a big community, a very nice community, with a lot of kosher stores and very nice schools,” she said. “Until now, nobody thought Strasbourg was scary. These days, Paris is scary for everyone. For Strasbourg, this was, except for the 2010 incident, the first time.”