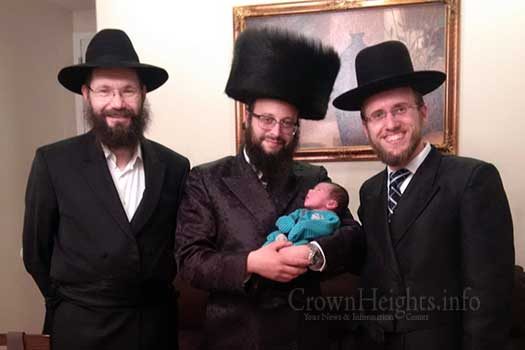 A story which began some thirty years ago with a bottle of wine from the Rebbe, followed by a goodbye party last year in Belgium, came full circle last week on Gimmel Tammuz in basement Shul in Boro Park.

A recent bris in a Boro Park basement shul tied together the strands of a story which began three decades ago in Crown Heights and continued on to a Belgian goodbye party.

Shimon and Yehudis Klein got married five years ago with hopes and dreams of starting a family in the Klausenburger mesorah in which he grew up. He was from Antwerp, she was from Boro Park, and together they moved to Brussels where Shimon had a parnassah as a chazzan.

But the years passed, and the sounds of crying and laughter which are the natural accompaniment of a growing family failed to materialize. The soaring ups and abrupt downs of tests and consultations filled the young couple with anxiety.

Money was also hard to come by,  and the couple felt that they just were not succeeding in their chosen home city. About a year ago they decided to move to New York. They had no jobs set up but hoped that a change in location would bring a change in mazel.

Before they left, the community in which the Kleins belonged in Brussels made them a goodbye party. Afterward, Dr. Hershel Greenberg, a local general practitioner and friend of the family, invited them to his house for a Shabbos seudah.

It was 3 Tammuz, the yahrtezit of the Lubavitcher Rebbe, Harav Menachem Mendel Schneerson, zt”l, so Dr. Greenberg took out a small bottle of wine and said that he had received the flask from the Rebbe some 30 years before. Almost immediately afterward he had misplaced the wine and had just recently found it.

“Let’s drink a l’chaim!” he told his guests.

The two families drank from the wine and Dr. Greenberg, who is a well-known and longtime mohel in Brussels, then wished them hatzlachah on their upcoming move.

“I give you a brachah that you should soon have a baby boy,” he said. “And when you make the bris I want you to invite me to be the mohel.”

The Kleins answered amen. After Shabbos they moved to Brooklyn, settling in Boro Park. They both managed to find good jobs, and shortly afterward — like a bolt of lightning, Shimon said — they heard the good news.

The baby boy was born two weeks early. As Klausenburger chassidim, Shimon initially expected to name the baby for his own Rebbe, Harav Yekusiel Yehudah Halberstam, zt”l, whose 22nd yahrtzeit would be the week after the bris.

It then hit him — the bris would take place on 3 Tammuz, exactly a year after he drank the wine from the Lubavitcher Rebbe, zt”l, whose yahrtzeit fell on that date. There was no longer any question what the name would be.

Dr. Greenberg came in from Belgium to perform the bris, which took place in the Sanzer shul on Dahill Road in Brooklyn.

Reached by Hamodia on Tuesday, the sweet cries and gurgles of two-week-old Menachem Mendel could be heard in the background. Shimon agreed that reporting on this story would give chizuk to other couples in similar situations.

“This is my personal miracle,” he said. “But for all those going through what we went through [you should know that] there’s a bright day coming in the end. Your hopes go up and down, but all of a sudden you hear the good news.”

And one other lesson he learned from the whole story: “You should try to get brachos from Yidden. They help.”