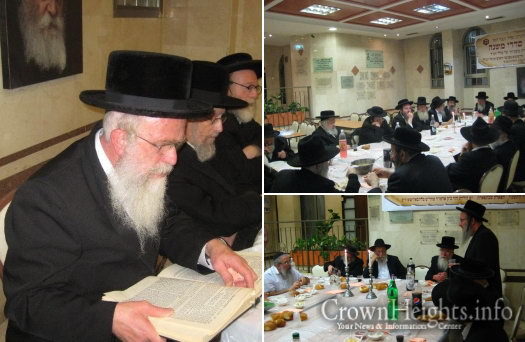 A special ceremony was held in Yerushalaim to celebrate the world’s longest standing shiur. Chevra Mishnayos of Colel Chabad completed all six volumes of Mishnayos and celebrated with the many guests who arrived at the Eshel Yerushalaim soup kitchen to take part in this special occasion.

But before we speak about the siyum, a bit of background information about one of Yerushalaim’s authentic miracles:

It is no secret that there are countless topics covered in the letters that fill the holy tomes of Igros Kodesh. However, there is one topic that is barely mentioned at all. That is the “Royal Family”, the private world of the Rebbe and his family. Therefore, it was especially touching to find the following telegram (Volume 21, pg.45) which the Rebbe sent on 10 Elul 1944: “my father Levi Yitzchak ben Zelda Rochel passed away, please say kaddish and learn mishnayos all year, pray for the health of my mother Chana bas Rochel”.

The 10th of Elul 1944. Europe was in the throes of World War II. Entire communities were being destroyed, the world went completely berserk, war was raging. Behind the Iron Curtain, communism was stifling any last remnant of Yiddishkeit. Hunger, shortages, and problems were prevailing all over the globe. Yet all these could not extinguish the small, pure flame that was brightly shining in the winding alleys of Yerushalaim, in the small Beis Medrash on Baal HaTanya Street. It was here, through drought and hunger, amidst the whistle of flying shells and harsh living conditions, that a small minyan of pure souls would prove to be invincible as they gathered daily to learn mishnayos under the auspices of the Colel Chabad Chesed Organization.

This amazing wonder lies within the words that the Rebbe wrote when he found out about the tragic passing of his father, the holy mekubal Reb Levi Yitzchak o.b.m. So much pain and tears are summed up into these few short and concise words. So much courage and strength bespeaking of the Jewish Nations eternal flame that will never be extinguished.

117 years have passed since Chevra Mishnayos was founded in its original sanctuary “Ohel Yitzchak”, or as it is known today “The Baal HaTanya Shul”. Eventually, the shul’s nickname turned into the official name of that little street. And the flame continues to burn brightly. Chevra Mishnayos has continued to be active with mesirus nefesh thoughout the generations, never skipping a day. Its participants have always included great talmidei chachamim, Yerushalaim’s crème de la crème.

The shiur is dedicated in loving memory of Colel Chabad’s past members and supporters who are listed in the “Colel’s Registers” which are faithfully and meticulously updated by the organization’s Gabbais. At the shiur, the mishnayos are learned in depth and at the end of the shiur the participants mention all of the names in whose memory they learned: first, all those who had passed away during the current year and their names are mentioned every day, and then all those whose yohrtzeit falls out today.

Throughout the years, Colel Chabad has accumulated a number of such Registers (in addition to those members and supporters whose names have been kept since the times of the Alter Rebbe, when the Colel was founded about 230 years ago). New names are added by the administration and sent to Yerushalaim. Each name is written according to Colel Chabad’s rules, and the minyan makes sure to learn in their memory, as well as say kaddish for each one separately on their yohrtzeit and throughout the first year.

An event that is completely Tiferes shebeTiferes

Completing the entire 6 tomes of Mishna takes about two and a half years. This year, on the eve of Beis Iyar, known as Tiferes shebeTiferes, the birthday of the holy Rebbe Maharsh – the minyan’s participants merited to complete the entire cycle once more. In honor of this momentous occasion, a special seudas mitzva was set up in the spacious soup kitchens of Colel Chabad, Eshel Yerushalaim located on Hachnasas Orchim Street. The soup kitchen shares a wall with the legendary Beis Midrash, whose entrance is from the other side of the building, off of Baal HaTanya Street. It is here that about 150 people receive a warm nutritious meal daily, free of charge. Today, the tables were set once again, this time in honor of the siyum of all 6 books of Mishna.

Immediately following the shiur and Maariv, everyone gathered for the seudas mitzva, under the leadership of Rabbi Ze’ev Dov Slonim, Rav of the Beis Medrash and member of the Beis Din Rabbanei Chabad in Israel. In attendance were also Rabbi Avraham Alter Hebber, board member of Colel Chabad who came especially in honor of the occasion from Kiryat Malachi, and Rabbi Moshe Shmuel Deutch, who, in addition to his many responsibilities in overseeing Colel Chabad’s many projects, lovingly takes care of the Chevra Mishnayos, organizing the names and recording the yohrtzeits, making sure that the minyan of learners doesn’t miss out a single name on any day.

The farbrengen began with the Rebbe Maharash’s niggun “lechatchila ariber” and a description of the Rebbe’s way of just jumping over any setbacks. The actual siyum was done by the maggid shiur, Rabbi Shmuel Sheinberger, who said “hadran” beautifully, and wove together the concepts of ‘tiferes shebetiferes’ and ‘lechatchila ariber’ with the name of hosting party, Colel Chabad, with its myriad projects dedicated to helping others.

“Just look at the activities of the past few months: helping thousands of Jews throughout Eretz Yisrael with food and clothes for Pesach, subsidizing close to 250 public seders, and financially aiding Anash by the dozens. There is no greater ‘tiferes shebetifers’ than this, and there is nothing more ‘lechatchila ariber’ than this!” concluded Rabbi Sheinberger.

“May we merit already to be Bais Shammai”

Blessings were brought by Rabbi Avraham Alter Hebber, who could not hide his emotions and heartfelt joy at meriting to attend this special occasion. He spoke about the Rebbe’s explanation on the machlokes between Beis Hillel and Beis Shammai, citing the second-to-last Mishna as an example. He concluded by expressing the heartfelt desire of every Jew that the halacha be according to Beis Shammai with the coming of Moshiach, and then the next siyum mishnayos will be done by Moshiach Tzidkeinu in Yerushalaim.

The keynote address was delivered by Rabbi Ze’ev Dov Slonim, who spoke about the Alter Rebbe’s greatness. Despite the fact that his mind was busy with lofty and spiritual worlds, he “humbled” himself and took care of the needy, as is told over in the famous story which we heard from our Rebbe. He connected it to the fact that the Mishna begins with the letter Mem, and ends with the Final Mem, explaining it all according to the secrets of Chassidus. He blessed all the shiur’s participants that they be able to continue to study for many years to come in happiness, health, and wealth.

The final speaker was one of the minyan’s top students, Rabbi Yitzchak Blank. With his unique wit and grace, he wove together divrei Torah to the delight of all the participants. The event concluded with heartfelt singing of the Arba Bavos, and dancing of “Moshiach’s Dance”. After benching, Rabbi Slonim gave out ‘kos shel bracha’ to all of the attendees.

At the end of the event, the participants dispersed with a feeling of elation. One thing was clear; the eternal flame that has been burning all these years, will very soon become a pillar of light that will overcome this dark golus and light the way towards Moshiach, in the merit of all the learning that was done with mesirus nefesh!