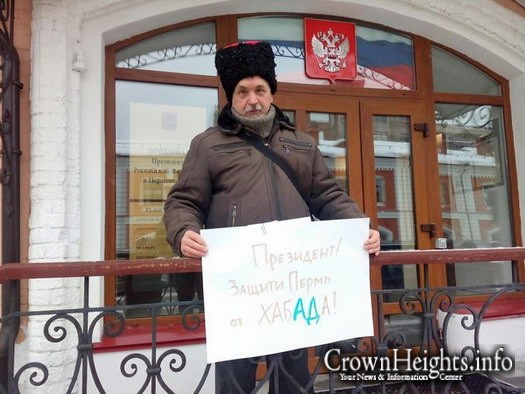 A protester holds a sign that reads: "President! Protect Perm from Chabad!"

Anti-Semitic demonstrators protesting the allocation of land to the Jewish community in the Russian city of Perm demanded the outlawing of the Chabad movement.

More than 100 people attended the rally near the area that municipal authorities in Perm, which is located 870 miles east of Moscow, designated for transfer without charge to the local Jewish community that is headed by a Chabad rabbi. They sang a song titled “Holy War,” a patriotic tune widely identified with Russia’s fight against Nazi Germany.

Unrest around the Jewish community of Perm has been brewing for years amid accusations made in 2013 that the local Jewish community made unauthorized use of a local theater. Unidentified individuals that year tried to set fire to the local synagogue.

On Saturday, the protesters showed up with signs reading “Chabad out” and “liberate us Russians from Chabad.” One protester held a placard that read “Chabad settlement is over the line: 1547,” an apparent reference to  the decision that year by Ivan the Terrible, a grand prince of Moscow, to ban Jews from entering or living in his kingdom because they “bring about great evil.”

But participants insisted they are protesting against Chabad specifically and not against Jews in general, the Russian news site Ura reported.