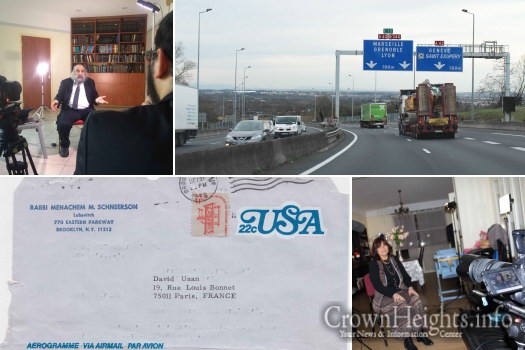 JEM recently returned from a 10-day ‘My Encounter’ trip to France, recording 35 testimonies about individuals’ experiences with the Rebbe – over 50 hours of material.

In recent years, the stories of the Rebbe in Living Torah, Here’s My Story and Hasipur Sheli have become a beautiful and pivotal part of how the world learns about the Rebbe, and how our children understand the Rebbe’s personal care and specific guidance for living a fulfilling life.

Under the Rebbe’s leadership and brochos, thousands of French Jews were drawn closer to their heritage and tens of Chabad centers and institutions were established in France, with close to 200 shluchim. Today, there are thousands of homegrown Lubavitcher chasidim living in France.

Rabbi Shmuel (“Moule”) and Bassie Azimov, spearheaded much of the known “French Lubavitch revolution,” often bringing large groups to the Rebbe and would encourage them to go to yechidus. In the early years (1960s and 1970s), each individual would have a private yechidus with the Rebbe. In the 1980s and 1990s it was a special “group yechidus,” which the Rebbe would address in French.

The My Encounter with the Rebbe project recently completed a 10-day trip to France, documenting hundreds – if not thousands – of hours of experiences and a fascinating array of the Rebbe’s guidance.

The bulk of the time was spent in Paris, where they interviewed some of the early Baalei Teshuva and other chasidim. Mrs. Echka Pevzner, the widow of the known chasid, Rabbi Hillel Pevzner, director of Sinai Schools, was one of the interviewees with important information about her relationship with Rebbetzin Chana that was documented in her interview.

The Rebbe met with many different people with various issues. Whether it was a college student asking the Rebbe what degree he should obtain, or the Rebbe’s advice to a couple who were struggling to care for their special-needs daughter, or specific guidance on how to raise children in Paris, or how one individual could take part in “Uforatzta” – the French spiritual revolution.

In addition to the twenty two interviews in Paris, the team also traveled to four other cities across France. “Since we started the My Encounter with the Rebbe project over ten years ago, we have been trying to get out to France,” said Rabbi Yechiel Cagen, the My Encounter director. “We knew that there are so many people who received guidance from the Rebbe – whether in yechidus or by written correspondence, and receive real-life answers on real issues. It is a priceless treasure that needed to be documented.”

The team traveled to Brunoy to interview some of the staff of the yeshiva to try and capture a small glimpse into the Rebbe’s care and insight into building Yeshivas Tomchei Temimim in France. Rabbi Itche Nemenov, the yeshiva’s mashpia, shared some of his father, Reb Nissan Nemenov’s, 300 letters and told of his own experiences learning in 770 in the late 1960s and early 1970s.

In Lyon, the President of the community talked about his unique story of the Rebbe that played out over many years.

One interviewee in Strasbourg was Rabbi Shmuel Akiva Schlesinger, who retold his yechidus, where the Rebbe guided him how to build the community, giving him specific instructions regarding the local mikvah. In Rabbi Schlesinger’s words, “The Rebbe knew more about the community of Strasbourg than I did!” Schlesinger also asked for a bracha for a sick woman in her community, for whom doctors were recommending an operation. Unsure whether this was a good idea, Rabbi Schlesinger brought all of her medical records to the Rebbe. The Rebbe studied the French-language documents and advised against the operation, instructing that charity be given on her behalf.

The team ended their trip in Yerres, where members of the Beis Rivkah faculty shared some of the Rebbe’s detailed instructions on how to run the school.

As they were only there for ten days, on many of the days more than 12 hours of photography was recorded! A big thank you to cinematographer Yankee Teitelbaum for the long days of filming, and to Rabbi Levi Uzan for helping making the trip happen. Rabbi Dovid Chelley did a masterful job coordinating all the many logistical details and conducting most of the French interviews.

Look out for many fascinating stories in upcoming Here’s My Story, Hasipur Sheli and Living Torah!