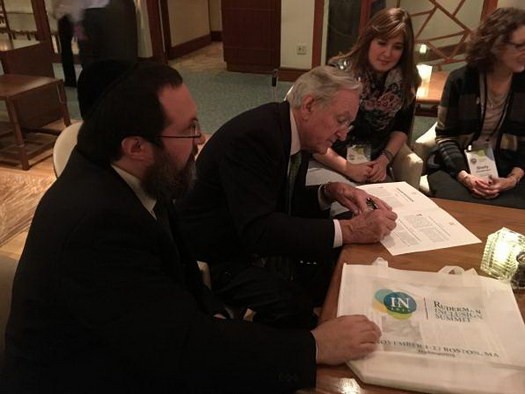 From Lubavitch.com by Dvora Lakein:

When he was 22 years old, Yehoshua Hoffman’s neck was broken in a serious car accident. Eight years later, he is a person with paraplegia. But his wheelchair hasn’t slowed him down: Hoffman, the proud father of three toddlers, is an inspirational speaker and is completing his doctorate in clinical psychology. Being a part of the community, he offers, is key to his momentum.

“But there is still a lot of discomfort,” he shares candidly. “There’s discomfort when people run out of their way to do everything for me. It’s uncomfortable when people make assumptions that just because I’m in a chair, I’m dumb. It’s awkward when I go places and everyone looks at me. And accessibility continues to be an issue as well.”

Dr. Sarah Kranz-Ciment PT, DPT agrees. As Project Director of the Ruderman Chabad Inclusion Initiative (RCII), a program promoting the inclusion of people with disabilities in the Jewish community, she believes that “education levels the playing field. When people gain an understanding of each individual’s innate value, inclusion becomes natural.”

The first step to that understanding is grasping the meaning of the word itself. Disabilities, both visible and invisible, include anything that affects a great part of life, such as mental health challenges, allergies, ADHD, blindness, autism, and chronic conditions.

In an effort to educate the greater public, RCII has teamed up with JLI, the Rohr Jewish Learning Institute, creating Toward Inclusion, a compelling course that will advocate for, and advance, the inclusion of people with disabilities.

“The course sheds light on how we ought to view and interact with those who are different than ourselves,” explained Rabbi Efraim Mintz, executive director of JLI. “G-d created us all, by design. We all possess disabilities. Toward Inclusion introduces the Torah perspective: we are not defined by those disabilities, but by the infinitely valuable Divine image that is at the core of every human being. This paradigm shift is a game changer in that it radically alters the way we view and respect both ourselves and others.”

Jay Ruderman and his family have been advocating for this shift for the past 12 years. Based in Boston, and operating both in the United States and Israel, the Ruderman Family Foundation (RFF) promotes inclusion across the Jewish spectrum. “When you consider that 20 percent of the population has a disability, and you count their families as well, it is clear that a sizeable portion of the public is affected,” Ruderman notes.

The Foundation partnered with Chabad last year, a deliberate move, says its director. “I immediately knew that inclusion matched up with the values the Rebbe taught. I remember clearly watching a  clip of a man and his son at an audience with the Rebbe. The father said he had another son, a child with autism, at home. The Rebbe told him that children with disabilities have a very strong connection with G-d, stronger than our own. It was a very powerful insight.”

Rabbi Yanky Raskin, who co-wrote the JLI course with Miriam Levy-Haim, attended the Foundation’s recent Inclusion Summit. “Through conversations, I learned that any type of classification, or seeing someone as an object of pity or as a source of inspiration, in a subtle way creates an ‘us’ and a ‘them,’ a division. I hope this course can help us transform all our relationships by seeing the whole person standing before us.

“Judaism teaches, and I hope this course conveys, that it is not a nice thing to help and include others. It’s an obligation and a right.”

Some 200 runners gathered for a meaningful Shabbat during the recent Miami Marathon weekend. A powerful aspect of their shabbaton was the introduction of key elements of this new course.

Instructor Rabbi Mendy Levy learned just as much as he taught. Levy serves as a hospice chaplain for Florida’s large aging community, interacting with people with disabilities on a daily basis. “The way I speak to people with disabilities changed immediately. I didn’t realize how important the words we use are. When it comes to inclusion, it’s not just a theory, it’s a method of changing our whole perspective, how we talk, how we think, how we act.”

Unlike other JLI series, Toward Inclusion will not only be taught in Chabad centers. Instead it is being offered by trained instructors at Jewish Federations, Jewish Family Services, and businesses and schools around the country.  “This course,” said JLI’s Mintz, “would greatly benefit any corporation or organization, whether in the private or public sector, whether for profit or nonprofit. The Torah-based principles that underlie Toward Inclusion will show corporate and organizational personnel how to better treat employees and serve their constituents.” In line with JLI’s accreditation for continuing education, participants will receive certificates indicating completion of extensive training in areas of inclusion.

“The most important thing to develop is a positive, warm, and accepting attitude towards those who are not exactly like us,” states Rabbi Yehoshua Soudakoff. “Once we internalize this attitude, inclusion comes naturally.” The rabbi, who is deaf, is director of  Jewish Deaf Multimedia, uniting the deaf Jewish community through Torah classes. This new course is right up his alley. “When we teach ourselves to bring others closer instead of pushing them away, we are in effect practicing inclusion,” he says.

On a practical level, Kranz-Ciment expects the course will spark a conversation, a dialogue that until recently was largely silent. From there, she hopes community members will strategize how to make their centers, and their events, more accessible. “Everyone needs a place where they belong, not just a place where people are being nice to them. At our  core, Chabad is inclusive, but we need to ask ourselves, ‘how can we do this even better?’”

“All of us, at some point in our lives, will have a disability. There is no ‘other,’” stresses Kranz-Ciment. “This affects each of us.”