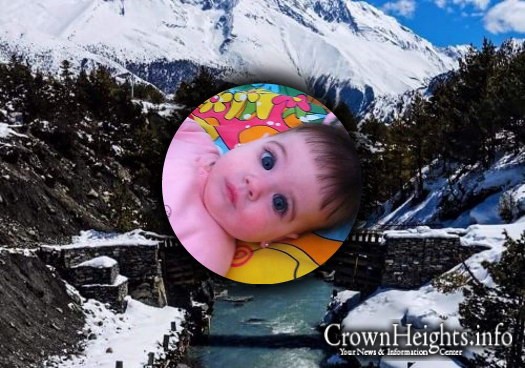 Mikvah on the Mountain: One Woman’s Miracle

Shlucha to Nepal Chani Lifshitz tells the story of Limor and Amir, a young Israeli couple who, after ten years of trying, had given up on their dream of having a child.

When the newsboy walks the streets of Kathmandu, I know it’s exactly 7:30 a.m. Bleary-eyed shopkeepers surface from dusty caravans, on the way to the river for their morning ablutions.

The rags that cling to the bodies of the rickshaw runners are no protection from the chill that spills off the white-topped mountains surrounding us. They huddle around a desperately small bonfire under our window. Emaciated street urchins roll off the cardboard boxes on which they spent the night and join the men around the makeshift fire.

A knock on the door wakes me to the new day. The first knocks are tentative; the second, more insistent.

“That’s it, Chani. I’m stuck,” she tells me the moment I open the door. “Completely stuck.” In a second, she’s over the threshold and falling onto our couch. She doesn’t need to say any more. The sadness of her face tells a whole story.

I’m quiet together with her.

For several days, Limor sits, silent and thoughtful, in the Chabad House. Once in awhile, she asks about this or that, but most of the time she sits, mute, observing the joyous youths around her with a bleak countenance. Her husband sits at her side, frowning and serious. We never hear him speak.

Everything was so good at first, the whole world awash in the colors of their hopes and dreams.

And then their troubles began. A year. Two years. Three. They looked with yearning at the families around them. They listened to the peals of childish laughter. They smelled the scent of a newborn that wasn’t theirs.

Why? Why did everyone else have a baby, but not them?

“It wasn’t for lack of trying,” she explains. “There wasn’t a specialist that we didn’t consult. There wasn’t a treatment that we didn’t try. Everyone said the same thing: It’s not going to happen.” Their dreams were shattered. The light left her husband’s eyes. Disagreement became a permanent houseguest. They forgot when they last smiled at each other, just smiled, like the innocents they once were.

Before abandoning their sinking marriage, they decided to make one last effort. They stopped the injections and the treatments and dismally loaded their backpacks “to clear our heads and to get as far away as possible,” she says. “First, to Nepal, and then afterwards, to India and maybe also China. If travel wouldn’t help us recover what had been destroyed, then there was no hope.”

The tears fall as she cries out that even this didn’t help! She buries her head in my shoulder, sobbing.

“Limor. I want you to come with me to immerse,” I tell her, putting my hand on her hand. My stomach is churning. To immerse? Where did I get such an idea just now? She leaps back, away from my touch.

“To immerse? Like, in a mikvah? Why should I all of a sudden want to immerse in a mikvah?” She rises from the couch. “I already immersed in amikvah before our wedding. That was enough for me. No, thank you!”

“But you don’t understand! Come with me to immerse. Perhaps this will help you have a child!”

What got into me? I can’t understand it. It’s so not like me! How can I say this with such confidence? It’s just that, in this moment, I feel that I am a pipeline. That I’m bringing her a message from another world.

She looks at me, angry and disappointed. “How can you say such a thing? For 10 years, I’ve been going from doctor to doctor, and not one of them could help me have a child. You know me for a minute-and-a-half, and you think you can help me?” The pain in her hazel eyes pierces my soul. She strides hastily to the door.

A moment before she can grab the doorknob, I catch her hand. I look deep into her eyes and ask her to listen to me for just one more moment.

“We don’t have a mikvah here, Limor,” I explain. “We immerse in the river. It’s an hour-and-a-half ride, and then it takes another hour to climb the mountain to get to a freezing river! We break the ice! Literally!” Tears roll down my cheeks. Where did they come from?

“I want you to come with me to immerse,” I plead. “I want you to help me break the ice, and in this merit, may G‑d bless you with a child!”

Her cold hands slowly warm in mine. The look in her eyes softens. “Where have you come from, Chani?” she murmurs. “How have you gotten to me? Enough. We’ve already given up. And … and … what about Amir? He’s not at all religious. We don’t believe in those things. What am I going to tell him?”

I calm her, tell her not to worry. My husband Chezki will talk to Amir.

Her inner turmoil slowly subsides. The sun shining through the window streaks her face. “Come, Chani,” she tells me. “Let’s go to the river.”

I tell her now is not the time. First, I want to be sure that she understands the magnitude and sanctity of the mikvah, as well as the requisite laws.

She comes to my home for the next couple of weeks. We sit and talk about what purity means. We talk about the power of the Jewish woman, and her own power. Limor’s eyes are still. She barely touches the coffee or the cinnamon buns I set out for her.

Her husband, Amir, was opposed at first, but when the day comes for her to immerse, he comes to our house to wait for her return. Limor follows him in, wearing a white dress, with such a light in her eyes! A light that I’m sure Amir himself hasn’t seen for a very long time.

A sputtering motorcycle rickshaw takes us to the bus station. We’re on our way to the village where “our” river is. The windows of our old bus have no panes, and a stubborn wind whips our faces. The seats are completely broken. We’re packed in tight with tens of Nepalese, 10 chickens and three goats. A sharp smell of sweat envelopes us. The road twists and turns.

Several times we find ourselves hanging over deep gorges, with only a step between us and oblivion. Each time that happens, I sneak a fearful glance at Limor, but she’s beaming. None of this disturbs her.

Nature sings to us as we alight from the bus. We’re surrounded by the white peaks of the Himalayas. Monkeys dance from tree to tree. The green blends in with the blue sky. I’m already used to these surroundings, but Limor is enthralled.

I know it’s the simplicity of this place where my husband and I merited to be emissaries—primitive Nepal, where for most of the day, there’s no electricity, there’s not always water in the taps, the poverty is disgraceful, and the infrastructure is lacking—that draws so many souls to us. We’ve learned to use the stumbling blocks and the difficulties to become stronger and more resourceful.

We still have an hour’s climb ahead of us. By the time we get there, the sun will have set, and the stars will be shining. The climb is long and exhausting, but I try to help pass the time by telling stories of righteous women who would go to immerse each month, regardless of circumstance.

I’ve accompanied tens of women who were initially wary of immersion up the steep grade I’m climbing now with Limor. Their hearts melt when they hear stories of women breaking the ice to immerse in the river. This natural feminine experience is enchanting. It’s just them and their Creator, while the mountains surrounding them whisper their prayers.

It’s pitch-dark when we get there, but I know every rock and could walk here with my eyes shut. Limor’s face shines like the moon. We hardly need the miner’s flashlight that I wear on my head. “Come, Limor,” I say before we reach the river. “Come, sit with me for just a moment. There’s a song I love to sing before immersing. Listen to the words.” The babbling waters of the river sing with us. The birds are silent. “May this hour be a time of mercy, a time in which Your heavenly will accompanies us.” Limor sings after me, word for word. Her head rests on my shoulder. We hold hands.

“A time of mercy, a time in which Your heavenly will accompanies us … ” I take an axe from my pack and go to break the ice on the river. Limor shivers, not just from cold. A soft cry escapes her as she enters the water. “It’s freeeeeezing!” Her cries rise straight to G‑d’s throne. When she steps out of the river, the stars descend to meet her.

I honor the pure, silent moment, and neither of us sully it with speech. I just hug her and pray. We sit on the steep path. Two women in the center of creation.

The next day, she sets off with Amir to India, and from there to China. We lose touch. I try every which way to find out what has become of her, but can’t. She is just … gone.

Until, 10 months later, the phone rings. Limor is on the line. At first, all I can hear is crying.

Then she tells me they experienced a miracle yesterday. They had a baby girl. They are calling her Nesyah (“miracle of G‑d”).