« A New View in Crown Heights
Here’s My Story: The Special Wedding Gift » 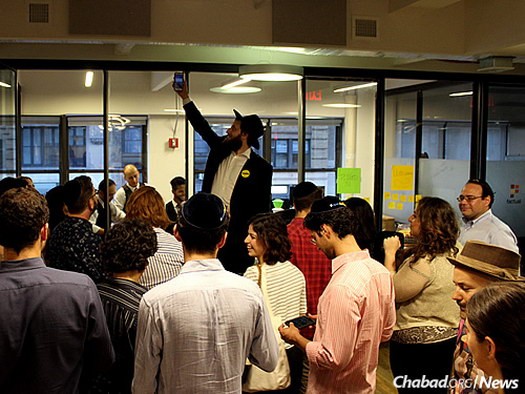 Rabbi Mordechai Lightstone announces it's time to turn off the cell phones for Shabbat at the tech-heavy South by Southwest (SXSW) festival in Austin, Texas.

The first time that Rabbi Mordechai Lightstone and his wife, Chana, attended the South by Southwest (better known as SXSW) music, film and interactive festival in Austin, Texas, attendees approached them and said: “We have a rabbi and his family here; we should do something Jewish,” recalls Chana Lightstone.

And so, the couple decided to host a barbecue—that is, until they realized that in Texas, a “barbecue” means roasting an entire cow. So they held a more modest cookout with kosher burgers and hot dogs.

The Lightstones have since added their own flair to the annual festival, but in a more subtle and spiritual way: They host a Shabbat dinner minus the electronics and minus the cell phones, which at SXSW may appear to some as sacrilegious. The standing humor is that attendees are required to converse—vocally, of course—in more than 140 characters, the maximum for a tweet on Twitter.

“A lot of people who attend SXSW say this is the busiest week of the year,” Chana Lightstone notes of the festival that completely takes over the city and opens this year on Friday (it runs through Sunday, March 20). “Many attendees welcome our Shabbat atmosphere and a different kind of energy, which stands in stark contrast to the rest of the festival. They get to experience Shabbat, sit down, unplug and unwind.”

The couple initially attended the festival in 2010 because Mordechai (who now works as social-media director for Chabad.org) was speaking on a panel about evolving Jewish identity on the web, titled “Judaism 2.0.”

“It’s a unique experience,” says Chana Lightstone of the week-long roster of events. “Everything is on wheels. There are a million receptions. Attendees meet people as they exchange business cards, walking around holding their cell phones and tablets, and are just super, super plugged in. People stay awake 24/7, with the adrenaline pumping.”

Katie Frankel, the director of community at ff Venture Capital, a firm based in New York, has attended the festival for three years and hosts a number of large parties at the event.

Of #openShabbat, she says: “It helps me stay connected to my Jewish identity during the craziness of the tech conference, as well as during my hectic life at home.”

‘Yiddishkeit That Holds Us Together’

A broader picture of Jewish life in Austin can be seen in the work of Chabad-Lubavitch emissaries there year-round, who serve a Jewish population of between 12,000 and 18,000 (the city is known for the hip and the young, who also tend to be very transient).

Rabbi Mendy Levertov, director of Chabad Young Jewish Professionals of Austin with his wife, Mussy—it’s part of Chabad Lubavitch of Austin, co-directed by Rabbi Yosef and Rochel Levertov—notes that many of the people who attend SXSW match the exact demographic they serve. The festival fits right into their activities offered throughout the year, including Shabbat dinners, weekly discussions, holiday festival celebrations, classes and business networking events.

“It brings together the many different pople who inhabit the Austin space at the same time,” explains Levertov. “Locals, visitors, SXSW presenters all get to meet on Friday night and schmooze a little about the Yiddishkeit that holds us all together. It also allows Jewish Austinites a chance to make out-of-town friendships. And who knows? Maybe it will even lead to a marriage?”

The rabbi plans to bring about 25 young adults to the dinner.

Chabad also has a near decade-long presence at the University of Texas in Austin: the Rohr Chabad Jewish Student Center, co-directed by Rabbi Zev and Ariela Johnson.

‘A Way of Connecting’

Since 2010, the Lightstones have made the annual trek from the Crown Heights neighborhood of Brooklyn, N.Y., to the tech-induced city of Austin, and focus their efforts on the dinner, called #openShabbat. The event has since gone viral, with a few hundred people attending and even more interested every year. The Friday-night dinner is now held at the Hilton Austin Hotel—one of the largest venues near the festival—and the Lightstones already expect more than 250 people.

It adds a dollop of Jewish tradition, applied wisdom and weekly holiday feel to the lives of those who focus on the new.

Alan Weinkrantz, a communications strategist, just returned to San Antonio after 16 months in Israel and will again attend the festival, which launched in 1987. A brand ambassador to Israel for a digital cloud company, Weinkrantz will participate in two panels on global entrepreneurship. He notes that he recommended the festival to a some Israeli friends who are attending this year.

He first met Mordechai Lightstone at another tech event—the 140 Characters Conference in New York—and the two have since become friends. He now attends the Shabbat dinner each year.

“It’s a way of connecting with other humans without all the other stuff in the middle,” says Weinkrantz.

In contrast to the multitude of networking events at the festival, during the dinner “business comes up, but we don’t do business. I’m not there to sell anything.”

Rather, he describes it as “a wonderful, real experience. The food is really good. It’s like one of your grandmother’s dinners, except you’re with 300 or 400 cousins.”

As the name implies, the Shabbat meal on March 11 at 7:30 p.m. is open to anyone, but the hosts request that people register in advance here.

« A New View in Crown Heights
Here’s My Story: The Special Wedding Gift »