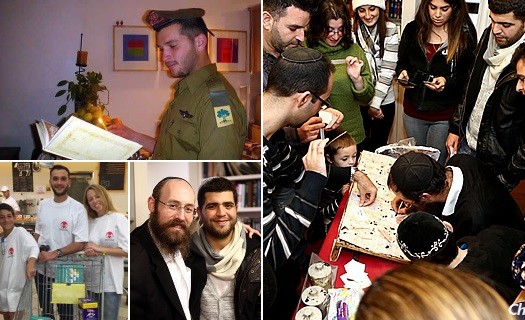 A group of students in Netanya, Israel, are working to make sure that the legacy of their friend, Alon Bakal, lives on.

“Alon was a law student with many friends, and was full of joie de vivre,” says Rabbi Shneur Simcha Landa, who co-directs Chabad at Netanya Academic College in Israel with his wife, Musya. “The community here, both the students and the faculty, was very close to him. He was always ready to help and regularly volunteered with an organization that distributed food packages to people in need. Many of us took his passing very personally. We feel as if we lost a brother.”

Students have been gathering at a booth on campus since the tragedy to light candles, share memories, gain strength from each other and select mitzvahs that they are pledging to do in memory of their friend.

Like many Israelis, Bakal enrolled in college after service in the Israel Defense Forces, where he served in an elite unit of the Golani brigade. He had just one more month left to finish his studies and receive his law degree at the college, and was due to start a job with a law firm in Tel Aviv. Until then, he was working at the Simta bar and restaurant, which he also helped manage and where he was killed during the terrorist attack.

“Alon was deeply committed to helping everyone around him,” says Shachar Debi, who was one year ahead of him in law school. “He was very sensitive to the needs of every individual, especially those whom others forgot.

“A classic Alon story: There were three old ladies who used to sit together and chat on a bench near his off-campus apartment. One day, he noticed that there were only two of them. Sensing that one of them must have passed away, he went inside and prepared two cups of steaming tea to share with the old ladies. He didn’t ask them any questions. He just wanted to show that he noticed and that he cared.”

A perennial jokester, Bakal was also a member of the university’s debate club, which Debi headed. “He brought a lot of silliness and levity to those debates,” she says. “He was so popular and well-liked that you may have expected him to be a snob, but he was nothing of the sort.”

Debi says that Bakal was idealistic to a fault, often leading his friends in conversation about how they could make a positive impact on society. When he chose to stay in school over Shabbat, he was often the one who would chant Kiddush for his friends before they’d share a traditional Shabbat meal on Friday nights after synagogue.

Positivity in the Midst of Pain

Following Landa’s lead, hundreds of students have accepted upon themselves to do additional mitzvahs in Bakal’s memory.

Debi says she has accepted two resolutions, reflective of two parts of his sparking personality. She will be volunteering at a food pantry to memorialize his caring and generous spirit, and took upon herself to light Shabbat candles to honor his devotion toTorah observance and tradition.

During the two-and-a-half years that the Landas have been on campus, they have created an oasis of spirituality and Torah for students there. “Our mission is to show them that academia and Torah are not a contradiction,” says the rabbi, who is the son of the chief rabbi of Bnei Brak. “We want them to know that they can take their place in the profession of their choice and live a full Torah lifestyle.”

Their work reaches beyond teaching, counseling and hosting spirited Shabbat meals. Despite a stereotype prevalent in Israel that most college students come from privileged homes, the rabbi notes that many barely subside. Before holidays, he raises many thousands of shekels that he uses to provide needy students with clothing and foodstuffs with which to celebrate.

“By Divine providence,” says the rabbi, “on Friday, before I had even heard of the attack, I sent a text message to the students discussing that the reasonG‑d revealed himself to Moses in a lowly thorn bush was to teach us that the Divine can be found with us in the thorniest, most painful parts of our lives. Many of the students confided to me that that little thought gave them the strength they needed to keep on going—aware that there is someone watching over us and holding our hand. We discussed how, despite the terrible pain, we need to increase in light and positivity.”

This past Shabbat, 20 students from Netanya participated in a Shabbaton in Kfar Chabad. The weekend’s activities were dedicated in Bakal’s memory, and there was much discussion on how to proceed despite the pain that comes with the loss of someone close.

“Alon did not leave a will,” says Debi “but we believe he would be very pleased to know that his life is being memorialized through people increasing their observance and strengthening their faith for him.”