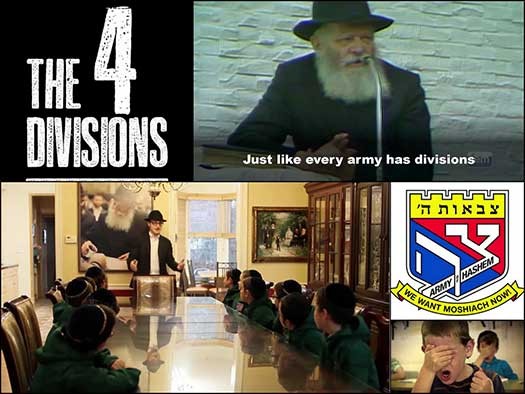 This Thursday, 21 Kislev, soldiers in Tzivos Hashem in elementary and middle schools across the world will unite by studying the orders of their commanding general through a new, specially created curriculum.

“With the terror and unrest that has gripped the world of late, every army is on high alert, following the instructions of its general. Tzivos Hashem is no different,” explains Rabbi Shimmy Weinbaum, general of the Chayolei Tzivos Hashem brigade. “Our commanding general, the Rebbe, has given us a clear battle plan, telling us that when we each overcome our personal enemy, our yetzer hora, we sillence and destroy the enemies of the world and bring Moshiach.”

Soldiers in every army need to train to uncover the enemy’s plots and strategize about how to combat the enemy. Similarly, explains the Rebbe, soldiers in Hashem’s army must gather with their generals and create a battle plan that will guide them in fighting the yetzer hora. In fact, 35 years ago, during Shnas Hakhel, the Rebbe gave clear instructions for these training meetings. The Rebbe said that each meeting’s battle plan should follow the maasim tovim of the Avos, Dovid Hamelech or the Imahos. Doing so will enable us to conquer the north, south, east and west.

To that end, Merkos L’Inyonei Chinuch and Tzivos Hashem Headquarters have prepared a complete once-a-month lesson plan for Chabad schools around the world, making it extremely simple to act on the Rebbe’s directives. Consisting of a PowerPoint slide show, step-by-step instructor’s guide and student workbook, these materials have been prepared with tracks for elementary school, middle school, and Chabad Hebrew schools. “Ultimately, it is the Tzivos Hashem who, with their sincerity and perseverance, will lead us out of this golus,” says Rabbi Mendy Kotlarsky, executive director of Merkos L’Inyonei Chinuch’s Suite 302 who financed the project. “The Rebbe truly believed in our children and so should we.”

Researched by Rabbi Osher Broh and produced by Mrs. Devorah Leah Wineberg, the goal is for all Chabad schools to unite by learning this material on the same day. The suggested day for this month’s international learning is this Thursday, Chof Aleph Kislev.

“Just as the Rebbe spoke about uniting everyone through the study of Torah, we thought it would be appropriate during this year of Hakhel to do so by gathering all children from across the globe to study the same parts of Torah,” says Mrs. Wineberg. “With the darkness we see in the world today, it is even more important that we unite the whole world in positivity! It is our hope that this project will hasten the Geulah and make us a keli for Hashem’s brochos.”

You can access the curriculum by clicking here. For more information, please email cth@tzivoshashem.org.