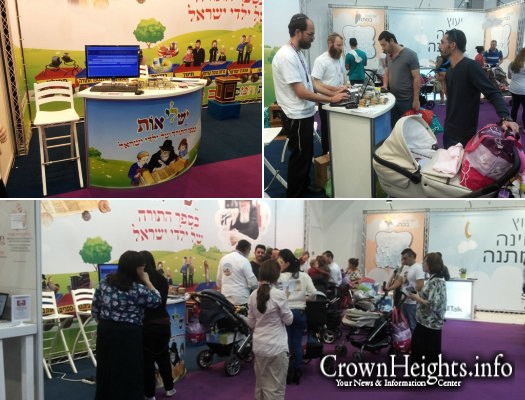 The three-day ‘Babyland Expo’ in Tel Aviv, which was held from Tuesday to Thursday last week, attracted around 30,000 visitors this year. Many of them stopped to do a Mitzvah at Chabad’s ‘Mivtzoim’ stand.

This is the sixth year in a row that a team from the Chish Hafatzos Hamaayanos publishing company, run by Rabbi Chaim Reichman, has manned a stand at the expo, with the help of avrechim and girls from Kfar Chabad and Tel Aviv.

During the three-day expo, hundreds of men put on tefillin and 4,000 Shir Hamaalos cards for the protection of newborns and their mothers, illustrated with a picture of the Rebbe, were distributed.

During the expo, girls gave out more than 10,000 sets of Shabbos candles and times for candle lighting.

The stand became one of the most popular spots at the expo. Minyanim were held there for Mincha and Maariv throughout the evening. Staff and visitors both took part.

Many parents were very excited to see the stand, and they photographed their children putting tzedakah into the box.

The stand was organized and sponsored by the producer of the expo, Mr. Phillip Hadad.