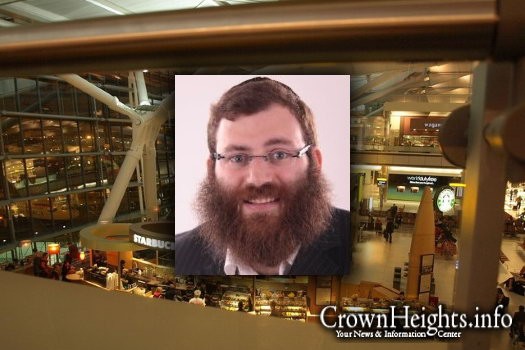 A Chabad rabbi is demanding a public apology from London’s Heathrow airport after being told to remove his shoes inside its multi-faith prayer room. Removing one’s shoes is required before entering a mosque, but Jewish law requires one to wear respectable footwear during prayer.

Rabbi Shmuli Brown, Chabad rabbi of Liverpool Universities, landed at Heathrow after taking an overnight flight from New York. He went to make his morning prayers inside the airport’s multifaith prayer room before catching his connecting flight to Manchester.

However he was interrupted by “a person in uniform, though I am not sure from what department” who entered the room and asked him to take off his shoes, as is the practice in mosques.

Rabbi Brown said: “I replied that it was a multi-faith room, but he just told me again to take my shoes off. He gave me an uncomfortable feeling and made me feel very unwelcome, so I left the room.”

The rabbi contacted Heathrow airport’s Jewish chaplain, Rabbi Hershi Vogel, who told him that this was not the first time such an incident had happened.

“I want Heathrow to issue a public statement and make it very clear that this is a multi-faith room that caters for all religions, and is not just a mosque,” Rabbi Brown said.

“This was the first time I have used such a prayer room inside an airport, and I won’t be doing so again. I am very much into displaying my Jewish pride, so I won’t be going into a small room and cowering in the corner.”

Heathrow has said it is investigating the incident.