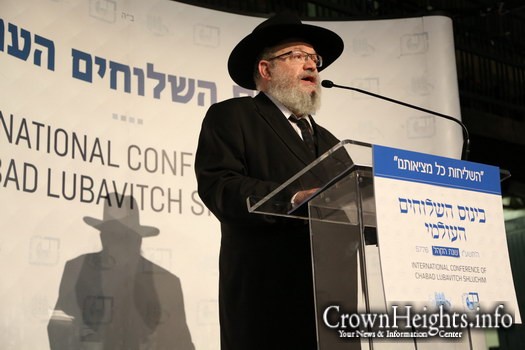 “We are all here united and larger in number than the representatives in the UN who voted for the two state solution to divide Israel. While they represent different countries we represent the Lubavitcher Rebbe, the one and only leader of our generation who vehemently opposed such a scheme. Therefore we hereby declare in the name of all the Shluchim that the UN Resolution is null and void and there never, ever will be a Palestinian state alongside Israel and every inch of Eretz Yisroel will remain under control of its rightful owner – Am Yisroel,” declared Rabbi Yoseph Gerlitzky, head shaliach to Tel Aviv to a resounding applause by 4, 325 Chabad emissaries from around the globe.

Gerlitzky, who is also the Chairman of the Rabbinical Congress for Peace, was addressing the annual Chabad Lubavitch International Shluchim Conference in Brooklyn, N.Y., the largest rabbinical convention in the world, this weekend. He accused the UN and all those who support the false hope of a two state solution for the violence in Israel which affects both sides. Every time A Palestinian teenager runs with a knife to stab an Israeli and gets shot, the death of this Palestinian is a result of the false hope of a two state solution.

He quoted the ruling in the Jewish Code of Law Orach Chaim Chapter 329 that forbids handing over land under Israeli control to foreigners for it can serve as a springboard to overrun the whole country.

“From time to time, he said, we meet with experts on the Middle East, professors and senior military officials to discuss with them the security situation. They always tell us that the reason an Arab gets up in the morning and decides to stab Jews or spends millions of dollars to buy missiles is because they feel that the entire world believes that they deserve a state of their own and Israel must provide them with more territory for this.

Hence, they feel that more terror and stabbings will pressure and precipitate Israel to give more and more. In the words of military officials: “Every Israeli declaration that under certain conditions we will be prepared to concede – this in itself is a tailwind to terror.

There is only one solution, said Rabbi Gerlitzky, “the moment it will be clear in no uncertain terms that the Palestinians will never have a state of their own under any conditions and Israel will never give up an inch of its land – the pressure will cease.

“When the world will realize that we are dealing here with cold blooded murderers that any concession we make will turn into a springboard that will enable them to overrun the whole country as the Shulchan Oruch rules, once they see that they will never ever get what they want this will eliminate the root cause of the problem.”

Rabbi Gerlitzky recalled a meeting he and a group of rabbis had with former US Ambassador to Israel, Mr. Martyn Indyk who identified with the Peace Now ideology. After telling him what Jewish Law states he yelled at us: “You people need to have your minds switched” and nearly chased us out of his office.

“At a later date we met with the French Ambassador to Israel and after listening to what we have to say he said, “look, we tried everything but it didn’t work. Maybe you are right and time has come to try the Torah way and the Halacha, maybe it will succeed.”

The Rabbinical Congress for Peace was founded in 1993 in order to alert public attention to the clear position of the Torah concerning territories under Israeli rule. This Halachic ruling is anchored in the supreme value in Jewish Law known as “the sanctity of life.” Saving a life supersedes the entire Torah. Because of this value, the Torah unequivocally forbids relinquishing even one inch of territory under Jewish rule or participating in any negotiations concerning withdrawal from any such territory.