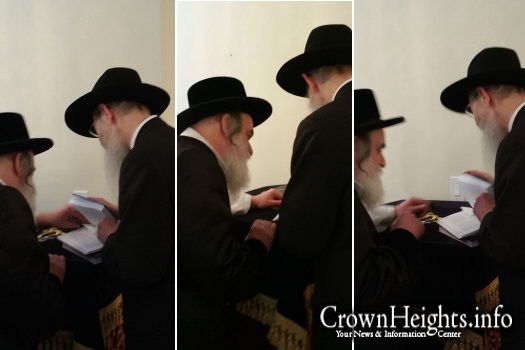 Rabbi Hershel Lustig, principal of Oholei Torah, paid a visit to the Vizhnitzer Rebbe of Bnei Brak, Rabbi Menachem Mendel Hager, who is currently residing in Crown Heights during an extended visit to the United States. The purpose of his visit was to gift ‘Reb Mendeleh’ a special sefer, which bears a connection between the two men.

Rabbi Lustig’s maternal grandfather and namesake was Rav Tzvi Hirsh Kahan, who was the Rov of the town of Strimtura in Romania. Rabbi Tzvi Hirsh was a renowned Talmid Chochom, who also headed a Yeshiva which attracted Talmidim from all over the region.

Despite his own personal greatness, Rabbi Tzvi Hirsh was a devoted Chossid of Reb Chaim of Antunia, who was the brother of the Rebbe of Vizhnitz, the Ahavas Yisroel, grandfather of the present Vizhnitzer Rebbe.

When his Rebbe, Reb Chaim passed away, Rav Tzvi Hirsh wrote a ‘Hesped’ (eulogy). While still a young man, Rav Tzvi Hirsh died ‘Al Kiddush Hashem’ in a Nazi concentration camp. The ‘Hesped’ he wrote for Reb Chaim was subsequently printed in the sefer ‘Nachlas Tzvi,’ which was published from his notes that were rescued after World War II.

During his visit to the current Vizhnitzer Rebbe at his residence on Eastern Parkway, Rabbi Lustig gifted him a copy of ‘Nachlas Tzvi’ which contains a Hesped his grandfather wrote for Reb Chaim, the Vizhnitzer Rebbe’s great uncle.

The Vizhnitzer Rebbe was very pleased with the gift, and expressed his gratitude to Rabbi Lustig for bringing it to him.