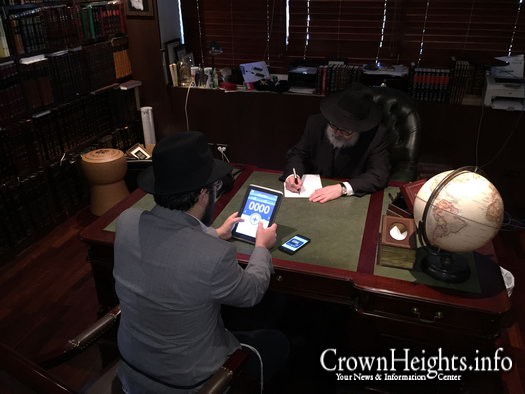 While many Haredi and Chassidic communities continue to reject modern technologies, the Rebbe always maintained that the “ultimate purpose for which these new technologies were developed is that they be used for holy purposes“. This position dated back in the 1960s, when the Rebbe pioneered broadcasting of Torah and farbrengens around the world.

Melbourne people of my generation may remember the “hook ups” during the 1970s, when the shul was filled with people listening to the Rebbe’s words live. I recall the elter chassidim standing, eyes closed in deep concentration, absorbing the Rebbe’s message. For out-of-towners during a time when air travel was far more difficult, this was one of the few ways to stay close to the Rebbe.

Over the years, we have continued to use technology for spreading the wellsprings of Chassidus. JEM and the shluchim office are great examples. More recently, they have also used social media on a large scale for successful matched fundraising campaigns. Programs like JLI are able to deliver quality content to thousands using technology, and shluchim use social media to engage with a large number of people. While we continue to churn out weekly printed pamphlets (that are read and then sent straight to shaimos), some innovators have moved this content to apps. If only someone could develop a content device that could be used on, we could eliminate so much of the wasteful printing.

When Apple released the iPhone and the AppStore, the market was flooded with cheap or free apps for anything and everything. Whatever you wanted to do, “there’s an app for that“. The availability of an internet connection wherever you are, and apps for whatever you need to do has transformed society, for better or worse. The Rebbe’s doctrine would dictate that we seek to use them for holy purposes.

So how about mivtzo’im, and in particular writing a regular דו”ח to the Rebbe? Well now, there’s an app for that too. Like many recurring activities, there are two aspects to mivzto’im: the action itself, and the recording. I’m sure many people find the recording and reporting – X tefillin, Y neshek, etc – a somewhat tedious thing to do. Social entrepreneur Eli Schlanger is developing an app to make all of that much easier.

Just like apps that record exercise, this app will be able to track specific mivzto’im activities, even remind the user or set targets, and then produce and send a דו”ח. People can share their achievements on social media to encourage others. This is another great example of taking modern technology and using it to improve the productivity of spiritual activities.

Schlanger has already raised about half of the funds needed to develop the app, but hit a wall. What to do? Turn to technology, of course. He has created a Kickstarter project to raise the balance of the funds needed. What does he offer funders as consideration? That the mivtzo’im facilitated through the app will be done in their zchus!