« Photos: YSP-Morristown Poses for Group Portrait
Confirmed: Pollard to Be Released in November » 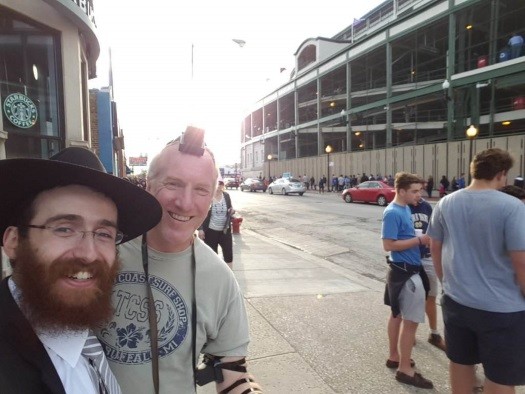 While waiting for a friend outside Wrigley Field in Chicago, writer Paul Schneider met a persistent young Lubavitcher, who tried to persuade him to put on Tefilin. Paul’s article about this encounter was a featured story on the web magazine The Good Men Project:

I had some time to kill before meeting my friend Rick at the Ernie Banks statue, so I sat on the patio outside the Starbucks looking at the thousands mill about, creating a wondrous people-watching pre-game scenario across the street from Wrigley Field.

Among them one particularly stood out. Anything but the garish, loquacious, obnoxious beer-stained baseball fan, he was instead rather well-dressed, black jacket and slacks, tall black hat and long red beard. Being somewhat of an observant Jew myself, I immediately pegged him as Hasidic, of the orthodox family of Judaism (full-disclosure, I consider myself more of the middle-of-the-road Conservative Jew).

From my vantage point I could see that he was attempting, with no success, to engage anyone who walked by. Every so often he would turn back and see me watching him, then go back to his business. Finally, after several minutes of watching his exercise in futility, I decided to engage him.

“Excuse me, but what are you doing,” I asked. Then I saw the small table he had set up next to him and it became suddenly abundantly clear.

“Are you Jewish?” he asked, in a most calm and disarming manner. He said his name was Dovid (pronounced Doh-veed): “Do you want to lay tefillin?”

I was immediately struck by a heavy sense of trepidation, because I knew what was coming next. I had been down this avenue before, always in private, never in front of a large crowd such as what was beginning to form around us. I knew the routine, and how silly I judged I would look in front of all these strangers.

OK a little religious lesson is in order here. Tefillin are a pair of small leather boxes that contain scrolls of parchment inscribed with verses of the Torah. They are held together with a leather strap which is wrapped around the arm (doesn’t matter which arm) so that one of the boxes sits in your hand and the other on your forehead. There are three prayers recited while wearing the tefillin. The Hasidim perform the practice on a daily basis in the morning, but it can be done anytime.

As soon as he asked me if I was Jewish, I knew I was cornered. He would try to persuade me to partake in the ritual. As I said, this wasn’t my first tefillin rodeo, but it had been several years. I hardly wanted to make a spectacle of myself and possibly become exposed to ridicule in front of the increasingly larger throng.

“Thirty seconds,” he insisted. “You have to go meet someone? I promise you won’t be late.”

Click here to continue reading at The Good Men Project.

« Photos: YSP-Morristown Poses for Group Portrait
Confirmed: Pollard to Be Released in November »