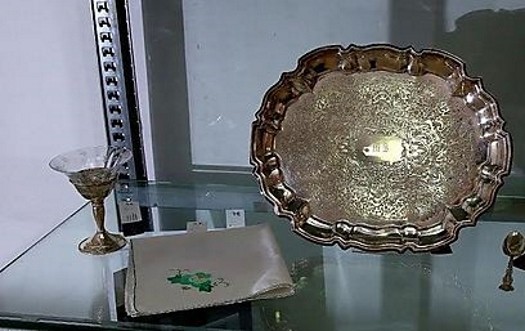 Nine items which used to belong to the Lubavitcher Rebbe or have been associated with him – including a Tehillim, a Siddur andShabbos dinner tableware – were sold to collector last week for a total sum of more than NIS 300,000 (about $80,000).

Nine items which used to belong to the Lubavitcher Rebbe, Rabbi Menachem Mendel Schneerson, or have been associated with him were sold to collector last week for a total sum of more than NIS 300,000 (about $80,000), 21 years after the Chabad leader’s death.

The items include a Book of Psalms he used to read from, a prayer book signed by him and Shabbat dinner tableware. Experts say the items were sold for record prices for such artifacts in the past generation.

Many items which were used by the last rebbe of the Chabad movement, who was one of the most prominent and influential Jewish leaders in the world, exchanged hands over the years. Some of them are kept in his home in Brooklyn, New York, others are in the hands of the synagogue managers who served him, and some found their way into the hands of ordinary Chabad Hasidim.

Some of these items were purchased recently by the Kedem Auction House, one of the largest auction houses in the field of Judaica, which sold them to collectors.