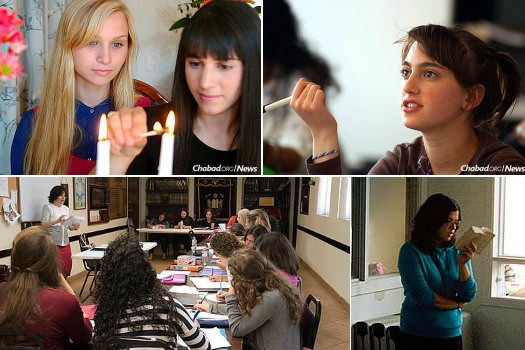 A Look Into the Lives of Young Chabad Women

In this third installment in a series of articles on the unique lives of Chabad-Lubavitch yeshivah students, Chabad.org writer Menachem Posner examines the daily life of young Chabad women:

They have been the subject of studies, documentaries and admiration for decades. They are the teens and young women associated with the Chabad-Lubavitch movement. Their enthusiasm, friendship, hard work, volunteerism and scholarship have earned them a unique place in the worldwide network ofChabad institutions and the Jewish world at large.

Here is a glimpse into their day-to-day lives.

Like all young people, the lion’s share of their teenage day is occupied by school. On the outside, Chabad girls’ high schools may appear similar to the dozens of girls’-only institutions that service the Torah-observant community. However, there are some very important distinctions:

Like most of their peers, the curriculum covers the full gamut of Judaic subjects (Bible with commentaries, Jewish law, philosophy, Jewish history), as well as secular ones. However, at the behest of the Rebbe—Rabbi Menachem M. Schneerson, of righteous memory—the students also get a taste of the Talmudand its give-and-take that serves as the bedrock of Jewish life and belief.

Following prayer, their rigorous course of study also contains many texts produced by the Rebbes throughout the generations, starting with Tanya—the seminal early work of Chassidic philosophy by Rabbi Schneur Zalman of Liadi, the founder of Chabad Chassidism—all the way through the edited talks of the Rebbe on a variety of subjects (which, incidentally, requires proficiency in bothYiddish and Hebrew).

Beyond schoolwork, many young women follow the voluntary study regimen instituted by the Chabad Rebbes: a portion of Tanya (following an annual cycle); some chapters ofPsalms (following a monthly cycle); the weekly portion of Chumash withRashi’s commentary; and the section of Maimonides’ book of mitzvahs that corresponds to the current chapters studied according to the annual cycle of his Mishneh Torah.

More often than not, Chabad girls waiting for a ride, or who travel via train or public bus, can be seen with their noses buried in Hebrew texts as they absorb their daily share of study.

Like all Western teens, it’s not uncommon for Chabad teens to rove shopping malls with their friends in search of clothing or shoes. However, in addition to fashion, they have another important yardstick in mind: tzniyut. (Literally meaning “modesty,” this area of Jewish law includes the basic guidelines young women have in mind when choosing what to wear, typically longer skirts and sleeves that cover most of the arms.)

Of course, they may sometimes be in the mall for an entirely different reason: “going on mivtzoyim,” a Yiddish-influenced Chabad lingo term that refers toassisting people in performing any one of the 10 mitzvahs selected by the Rebbe as particularly important to emphasize.

Often in pairs, girls tend to hand out little packages of Shabbat candles to Jewish women. Even as young teens, they volunteer to help at area Chabad centers and other institutions—and even the private homes of people in need—living the Chassidic ideal that a person may live an entire lifetime just to do a favor for another. Along those lines, they visit people in hospitals or old-age homes.

Mivtzoyim are just some of many spiritually oriented extracurricular activities these girls engage in. Like their male peers, they may participate infarbrengens, replete with rousing Chassidic songs, stories, words of inspiration and camaraderie.

In many schools, girls choose to be part of Achos Hatmimim, a club originally formed in the 1920s by Latvian teens who had turned to the Previous Rebbe—Rabbi Yosef Yitzchak Schneersohn, of righteous memory—asking for guidance in learning Chassidic texts. In its current incarnation, the club encourages members to add in their learning and incorporate other observances of Jewish law and Chassidic practices into their daily routine.

Over winter break, many girls branch out to Chabad Houses across North America and beyond to serve as staff members of “winter camp,” where Jewish children, often those in public school, get a high-energy jolt of Jewish-related activities and entertainment.

During the summers, high-schoolers often work as counselors in overnight and day camps all over the world. For some girls, this may be their first time away from home. Their sincerity, energy, excitement for Judaism and spunk have made the counselors legendary in the cities where they are hosted.

High school is generally followed by a year (or two) of seminary, most often in a city away from home and commonly in Israel. More than just academic, the seminary experience is one where young women often dive head first into the spirit of Chassidic life, exploring and probing the depths of Jewish tradition—and their own budding adulthood—and what it means to them.

Some girls may continue on for a second year of seminary known, quite appropriately, as “sem bais”—“sem” being short for seminary, and “bais” being the second letter of the Hebrew alphabet (in Ashkenazic-accented Hebrew). In fact, from then on, instead of saying a girls’ age, they can be referred to simply as what year “sem” she is, even though there are not that many years of such schooling. For example, you can refer to a 21-year-old as “sem dalet” sincedalet is the fourth letter of the Hebrew alphabet, and it’s been (around) four years since she has entered seminary.

Following seminary, some may choose to further their studies, but most spend a few years “on shlichus,” assisting Chabad-Lubavitch emissaries from China to Chicago—and just about everywhere in between.

Working for modest pay—even by the already modest standards of the non-profit world—they often serve as Friendship Circle directors, preschool teachers and Hebrew-school administrators, and fill many other roles as part of a Chabad center’s hub of activity. It would be no exaggeration to suggest that, along with the husband-and-wife emissary team, they are truly the third leg upon which the Chabad world stands.

Many girls also become teachers, giving back to the institutions where they were students just a few years earlier.

In recent years, the girls gather annually for a conference held alongside the flagship International Conference of Chabad-Lubavitch Women Emissaries in New York, recognizing their unique contributions to the Chabad House enterprise.

By their early 20s, most girls are ready for marriage. Girls from North America and Europe will often (but by no means always) move to the Chabad enclave in the Crown Heights neighborhood of Brooklyn, N.Y., working in nearby Chabad centers or teaching at the many Jewish schools in the area, and living together with friends or relatives. There, they are also closer to the bevy of young men they can potentially meet through the agency of a matchmaker.

Yes, traditional Jewish weddings are arranged. That means that a lot of hard work goes into arranging them since a wedding has never been known to organize itself. However, the couples in question—and only they—are the ones who decide to make it happen. Here is the typical course of action in the Chabad world.

Someone suggests that a certain male may be appropriate for a certain female. This someone may be a professional shadchan (“matchmaker”) or just a friend or relative. Once alerted, both parties (and their families) will begin to look for complementary personalities, similar life outlooks and other background information. If both are in agreement, the young man will take the young woman out for a date.

Typically, he will drive her to a hotel lobby, park or other public location for the chance to sit and talk. Assuming that goes well, they will meet again. If not, they turn their sights elsewhere, and the search continues. While some marry the first person they date, anecdotal evidence suggests that most in the Chabad world date more than one before finding their bashert, their intended.

After as many dates as needed or wanted, the man proposes and the woman accepts. Like most major life decisions, the engagement is cemented after a visit to the Ohel, the Rebbe’s resting place in Queens, N.Y. If all goes according to plan, they typically marry within a few months.

So the next time you see a young woman handing out Shabbat candles, perusing Hebrew texts or lovingly caring for a child, you’ll know just a bit more about her world.

The first in a series of articles on Chabad-Lubavitch yeshivah students, “Beneath the Fedora: A Day in the Life of a Chabad Yeshivah Bochur,” can be read here. The second in the series, “The Senior Yeshivah Student: Traveling Near and Far, Offering Jewish Content and Connection,” can be read here.