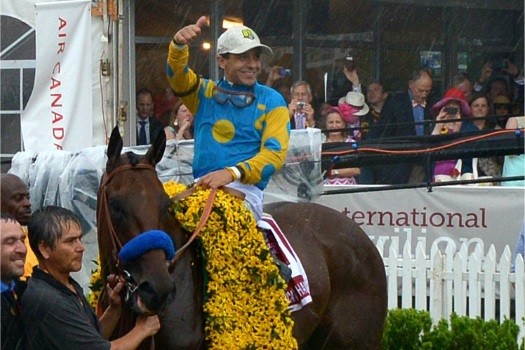 Victor Espinoza, the jockey who prayed at the Lubavitcher Rebbe’s Ohel in Queens on Thursday ahead of competing in the Belmont Stakes, won first place in the annul race today, making him the first jockey to claim the elusive Triple Crown trophy in 37 years.

As American Pharoah came out of the far turn and squared his shoulders to let his rider, Victor Espinoza, stare down the long withering stretch of Belmont Park, a sense of inevitability surged through this mammoth old grandstand. The fans in a capacity crowd strained on their tiptoes and let out a roar from deep in their souls. It was going to end, finally — this 37-year search for a great racehorse.

No, a battered old sport was looking for an immortal thoroughbred, one worthy to stand alongside Sir Barton and Assault, War Admiral and Whirlaway, Count Fleet and Citation, a horse able to earn the title of a Triple Crown champion.

There had been only 11 of them history, and America had elected five presidents, fought three wars and lived through at least three economic downturns since Affirmed had last completed the feat in 1978.

Click here to continue reading at the NY Times.