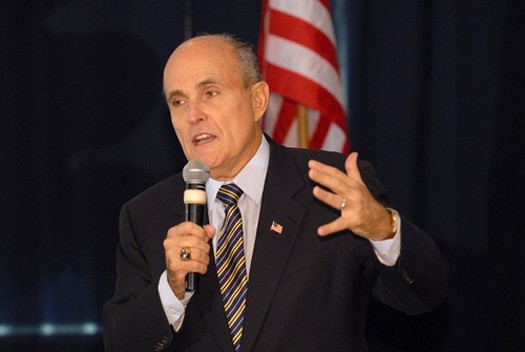 Echoing previous criticisms of the Iranian nuclear deal, Giuliani noted his hope that Congress stops President Barack Obama’s pact with the Islamic Republic, a country, he said, who was led by a man who “appears to be insane and wants to destroy the state of Israel.”

“I would not make a deal with Iran,” Giuliani asserted. “I don’t believe in making a deal with a government that’s run by a person who appears to be insane.”

“There’s something about that I don’t get and it’s deeply disturbing and I hope the United States Congress who I know have tremendous doubts about what the President is doing … is able to stop it,” Giuliani added.

The former mayor also stressed to the soldiers that the United States and Israel are fighting a common enemy in Hamas and other Islamic terror groups, further criticizing Obama for refusing to use that term.

Noting American admiration for the Israelis’ service to their country, Giuliani praised one of America’s “greatest allies” for also helping to defend the US against terrorist threats.

“We’re both fighting, America and Israel, the same terrorists, the same ideas about Jihad and because of Israel I think the United States gets a lot of help and a lot of support. We learn a lot about security … Hamas is an enemy of the United States also,” Giuliani argued.

“Thank you very, very much for what you’re doing because by defending Israel you’re also defending America,” he said with gratitude.

At the end of the meeting, Giuliani took a photo with the soldiers which he then sent in a text to Prime Minister Binyamin Netanyahu.