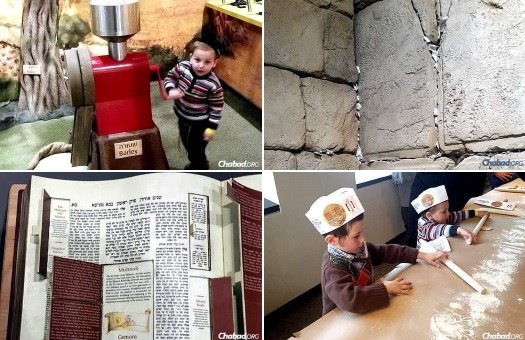 Experiential learning has long been at the core of Jewish education. Think of brushing the letters of the aleph-bet with honey or directly engaging children in the Passover seder.

Along those lines, the relatively new fourth-floor exhibit of the Jewish Children’s Museum in Brooklyn, N.Y., represents yet another building block for young minds. Called “A Voyage Through Jewish History,” the goal is to learn through entertaining and engaging activities.

Designed by Work With Your Brain—a museum and exhibit design firm, and built in part thanks to a donation from philanthropist David Slager and a grant from New York City—the themes of the floor present visitors with a powerful experiential survey of Jewish history.

Spanning the time of Abraham through modernity, the exhibit offers not just a survey of Jewish history, but a chance for guests to actively participate in exploring such history. Guests are not merely spectators to the past, but put squarely in the center of it.

The various sections include “Patriarchs and Matriarchs,” “Mount Sinai Experience” (this opens soon; guests will be able to relive some of the defining moments in Jewish history, including the Exodus from Egypt and the giving of the Torah on Mount Sinai), “Temple and Tabernacle,” “Land of Israel,” “Sages Through the Ages,” “Jewish World Today,” “The Holocaust” and “One Good Deed.”

In the midst of it is a massive replica of theWestern Wall (Kotel), where visitors can write down their prayers on notes and insert them into the wall, just like in Jerusalem.

Recreating the Midrashic narrative about Abraham’s Tent—a refuge to desert wayfarers that afforded them food and water, and a chance to bless G-d—a stand at the exhibit lets children assemble the blessings said over food. A bank of phones on a nearby wall allows them to record their own personal prayers.

An exhibit about the Tabernacle in the desert doesn’t merely suffice to show a diorama of the structure, but provides the chance for kids to build it themselves.

Entering the hall of Jewish sages, a copy of the Talmud lets guests literally peel back the text, showing the layers of commentary and the historical context.

The seven-story museum, which opened its doors to the general public for the first time exactly 10 years ago during Passover of 2005, is the largest Jewish-themed children’s museum in the world. It primarily serves elementary-school-age kids and their families.

According to its directors, the museum, along Brooklyn’s Museum Row on Eastern Parkway in the Chassidic neighborhood of Crown Heights, welcomes some 200,000 children every year.

Chaya Serebryanski, the museum’s program and marketing director, says “children should be able to experience their rich heritage, and see the continuation of the Jewish people and their role in reaching a greater Jewish future.”

By example, she points to the final aspect of the exhibit. In a room connected with the arrival of Moshiach and the Messianic era, guests are given the chance to carry on their experience outside the museum walls, encouraging them to take a lesson or action from Jewish history and tradition, and implement it into their lives.

“We hope that by encouraging everyone to do a good deed,” she says, “we can unite our guests as active members in the tapestry of Jewish history.”