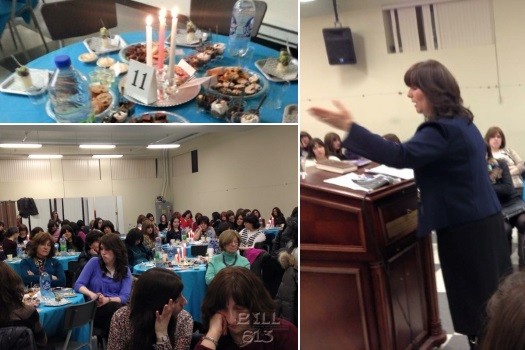 On the evening of Chof Beis Shvat, over 120 Lubavitch women gathered at Beth Rivkah in Montreal to remember Rebbetzin Chaya Mushka. Everyone was seated in designated seating in order to facilitate getting to know new people.

The evening opened with a video of the Rebbetzin that was shown on a projector. Rebbetzin Chanie Rosenblum, an educator from Pittsburgh, was the featured guest speaker. She spoke about how women are leaders in their communities. She noted that women are the ones who make sure things happen, pointing out the reality of Chabad Houses around the world that are run by women who also lead in their homes and their marriage. She stressed that wherever a Lubavitch woman goes, she must try to positively impact someone.

Rebbetzin Rosenblum also spoke about humility. How being a leader means being humble because if you consider yourself then you don’t want to be a leader. Her unique sense of humour had everyone laughing throughout her talk, and she also shared many touching personal stories that were inspirational.

At the end of the evening, delectable mini deserts that had been baked by over a dozen volunteers from the community were served. The women left inspired and ready to spread good deeds throughout Montreal with whoever they will meet.