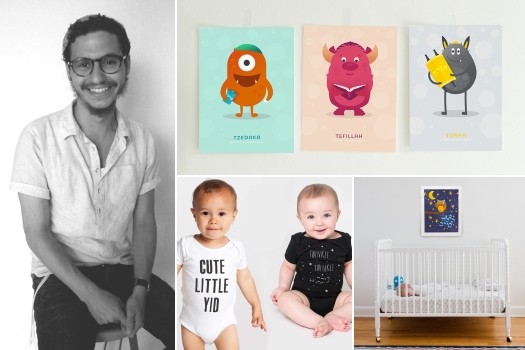 While Yossi and Tal Belkin were expecting their first child, they scoured the World Wide Web for all things baby, and pinned away their days full of adorableness on all fronts but one: modern art for Jewish kids. They were shocked to find a gaping hole in such a modern art-centric world.

Yossi, a graphic designer by trade, realized that if he wanted to find the genre he was looking for, he would have to create it himself.

“As a graphic designer, and soon-to-be dad, I had been working on branding projects ranging from hipster BBQ joints to Fortune 500 companies. A lover of art and all things creative, I jumped on the baby-art-making bandwagon and decided to conjure up some of my own designs,” said Yossi.

“When I was young I heard a tale of a sacred man, a sneaky fox, and a frightened fish. Rabbi Akiva lived during the times of the Roman Empire, a time when the study of Torah was punishable by death. Once, when asked by his students why he wasn’t afraid to continue his learning, he responded with a parable: A hungry fox was walking through the forest when he happened upon a stream filled with fish swimming to and fro. When the fox learned the fish were swimming from the nets of men trying to catch them for food, he decided to give his cunning a shot and sat down at the river bed to chat with the fish. ‘If you come out here onto dry land we can live together in peace and harmony.’ Said the fish to the fox ‘You’re not quite as smart as they say. At least in the stream we have a chance at survival, but a fish could never live out of water!’

“The world may offer solace and comfort to us now in a myriad of modern ways, but a Jew could never live without Torah. And surely, a Jewish child could not thrive without it,” Yossi explained.

And thus was born Fox & Fish, the ‘little Jewish print shop’ where all things baby – from onesies to framed artwork and lots more – can be purchased for your little bundle of joy.

The Belkins say they are working hard on getting a larger selection of products, including canvas prints, more framed artwork and clothing.

Click here for more information or to shop at Fox & Fish.