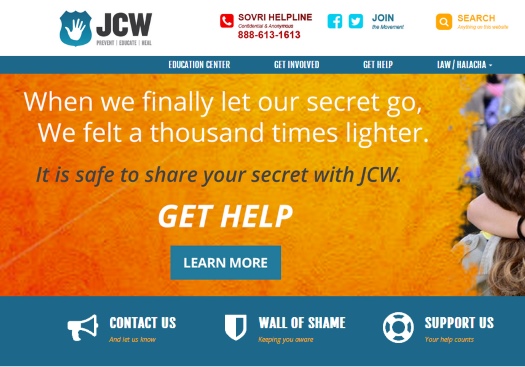 After shuttering its website in back in February, followed by a successful crowd-funding campaign of over $150,000 in July, Jewish Community Watch has made good on its promise and launched a new and improved website dedicated to combating child abuse in the Orthodox Jewish community. Included in the new site is the organization’s controversial ‘Wall of Shame,’ bearing the names of 93 alleged child abusers, along with over 150 pages of educational material.

Jewish Community Watch, an organization dedicated to preventing child sexual abuse (CSA) and assisting survivors within the Orthodox Jewish community, announced the relaunch of its website, designed to assist survivors of abuse, educate parents about CSA, and expose abusers within the community. The new site boasts extensive content, including a vast education center, an enlarged Wall of Shame, information for survivors to get help, relevant laws with regards to each state and myths and facts on CSA.

Jewish Community Watch was founded in 2011 by Meyer Seewald, a survivor of sexual abuse, with the stated goal of breaking the silence and shame that surrounds CSA in the Orthodox Jewish community. JCW’s first website featured a Wall of Shame, where alleged molesters had their pictures posted to warn communities of their threat, and initiated multiple programs geared towards preventing this abuse. Unfortunately, due to an enormous caseload and a lack of funding, JCW was forced to close down in February 2014.

Shortly thereafter, Seewald received hundreds of calls and messages protesting the closure, as well as commitments by many to donate money and time towards the reopening of JCW. Thus, after a crowdfunding campaign in July raised a major portion of its annual budget, JCW was relaunched.

A team worked for four months to create a new, fully-featured website. The education section includes over 150 pages of information directed at parents, survivors, parents of victims, family of offenders, and even offenders themselves. Included in these articles is information on how to talk to your child, how to spot signs of abuse, tips for preventing abuse, relevant laws and Halachos, resources for survivors, and how to go about reporting abuse.

The extended Wall of Shame has 93 profiles of both alleged and convicted Orthodox Jewish abusers, including their photos and last known address. Users of the site can filter the Wall of Shame by location as well as by whether the perpetrator has been arrested, convicted, or exposed by JCW. The profiles of abusers include a list of where they have worked, links to arrest reports, and relevant news stories.

In an effort to increase the organization’s transparency, the website now includes details of the investigation process of alleged abusers, a news section, and a “Become a Voice” page where the public is urged to speak out for children who cannot speak for themselves, creating awareness events, volunteering, or taking a pledge to stand together with survivors.

In a statement, Meyer Seewald said the following:

“We didn’t create this organization because we like to talk about this horrific topic, we created it because we don’t. The mission of JCW is simply to prevent, educate, and heal. We prevent further abuse by notifying the public of the threat of the abusers in their vicinity, we educate the public about what to look out for, and we help survivors of abuse heal by reminding them that they are not alone and by supporting them through their battles.

“Unfortunately, along with the epidemic of abuse, there is this epidemic of silence by many of our community leaders. It is only possible to stop abuse if we talk about it and bring attention to the problem. When Moshe Rabbeinu froze in the sight of the immorality of Zimri, Pinchas, who was two generations younger than Moshe, stepped up and did what was right. Each and every one of us has to be that Pinchas. Our leaders have frozen. They are not doing anything to fight this epidemic in our community and many do not even know how bad it is. They don’t realize the number of our children who have turned to drugs and alcohol, left the Derech, or battled psychological issues because of it. It is incumbent upon us, as the younger generation, to get involved, to educate our leaders and community, and to do whatever else we can to help put an end to this evil.

“I, therefore, view jewishcommunitywatch.org as a statement of the exceptionalism of our community.  When the Orthodox Jewish community is seen acknowledging that child sexual abuse does happen, and that we are taking a moral stand against it, we will be a light unto the nations and a true Kiddush Hashem.

“Rabbi Tarfon says: “It is not your responsibility to finish the work [of perfecting the world], but you are not free to desist from it either.” (Pirkei Avot 2:16)