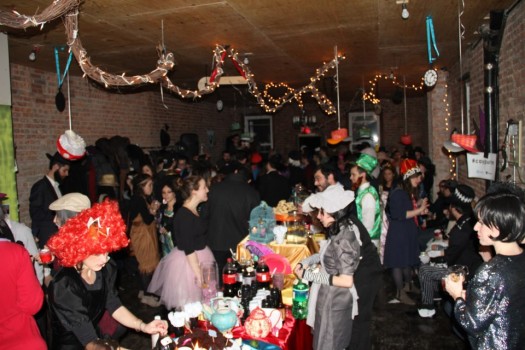 For years, hip congregants at a popular Brooklyn Hasidic synagogue packed a raucous Purim party. The annual fete was the biggest event on Chevra Ahavas Yisroel’s social calendar–until this year.

The congregation’s rabbi, Yechezkel Denebeim, 28 years old, abruptly canceled the March 15 bash after he said he experienced an “awakening” during a recent trip to Israel.

The decision has divided Rabbi Denebeim’s followers, raising questions about the identity of the congregation and where it fits into the city’s world of Orthodox Judaism. The synagogue has been credited with pulling many other disaffected young people back toward prayer, even as memoirs of the formerly faithful crowd best-seller lists.

Instead of cramming up to 600 people into the congregation’s Albany Avenue synagogue–where liquor flowed and there was masked dancing–the congregation’s Purim celebration should be more a “meaningful, Torah-infused” affair, Rabbi Denebeim wrote to members in a Feb. 14 email. A small, sit-down meal was planned in its stead.

“My whole attitude had become about making this big party and having an extremely active Facebook page and making great events and mixing the pot,” said the Lubavitch Hasidic rabbi. “In a certain way I lost sight of the real, like what are we really trying to achieve over here?”

Some embrace the rabbi’s more sober vision of Purim. Others said the cancellation scuttles a community-building exercise of Jews in their 20s and 30s who, if not for their tzitzis–the knotted fringes Orthodox men wear dangling from a special undershirt–might be mistaken for garden-variety Brooklyn hipsters.

“I was definitely looking forward to going–I’m confused as to why [Rabbi Denebeim] wouldn’t do it,” said Yitzie Bruck, 30, who was crestfallen about the cancellation. “It’s something I would not have missed.”

Some congregants said the celebration missed the point of the holiday.

“The community wants a more authentic experience,” said Yocheved Sidof, 35, an educator and mother of four who has been involved with the synagogue since its inception. “For some people, Purim is a time to let loose and let your guard down, but that’s not really what Purim is about.”

Purim is likened to Halloween. Religious revelers don costumes and pack synagogues to hear the story of Queen Esther, Judaism’s most famous heroine, the brave young bride of a Persian king who staked her life to save her people. They also take seriously the Talmudic injunction of imbibing ad lo yada: until one forgets the difference between the villain who plotted the annihilation of the Persian Jews in the fourth century B.C. and the hero who thwarted him.

Last year’s event had a Mad Hatter theme and a bluegrass band that played into the wee hours. This Saturday’s party was planned to mimic Comic Con, with members dressed in costumes such as Batman. Fraternizing between men and women–a rarity at Orthodox Jewish events–was common. Rabbi Denebeim said several couples have wed after the annual bash.

The event, though, drew criticism from Crown Heights’s religious elite. Some congregants speculated that outside pressure contributed to the decision to cancel the party.

“This is a whole controversy in our neighborhood,” said Rabbi Shea Hecht, a prominent leader in the Lubavitch community and a supporter of Chevra Ahavas Yisroel. Like other more conservative members of the Hasidic enclave, he said he worried that partygoers “act in a way that would be the opposite of respectful to the synagogue and the community.”

The comments sections of local blogs that focus on the religious community said the congregation was “corrupting the community” with the parties, which were “poison for the soul.”

“When we make the party, that’s when the broader community is up in arms. They’re not going to be freaking out that we’re not making this party,” Rabbi Denebeim said.

Chani Frankel, a 29-year-old mother of four who co-owns Crown Heights flower shop Mimulo—where the congregation held its first services—blamed the rowdy reputation on hundreds of other young Jews who only ever came for the annual party. “Getting dressed up with a bunch of friends on Purim in the spirit of the miracle is a lot of fun, but the kids get kind of shafted,” she said. That’s because parents the next day are often hung over during more child-friendly activities such as carnivals and gift exchanges, she said.

Some congregants such as Ben Faulding who were initially disappointed by the cancellation are also coming around to the new plans. Last year “was raucous,” he said. But in the end, “we didn’t want to be the frat party shul.”