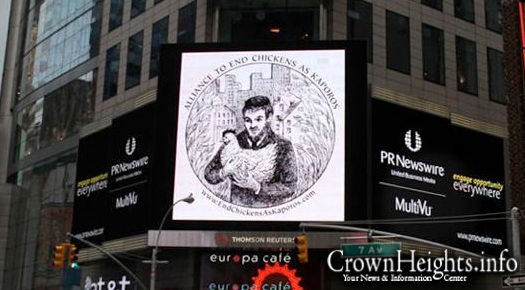 A Manhattan billboard by the Alliance to End Chickens as Kaporos.

Op-Ed: A Double Standard on Kaparot

This week thousands of chickens are being slaughtered as part of the ‘Kaparot’ ritual performed by some Orthodox Jews before Yom Kippur. A live chicken is rotated over the head, expiation prayers recited and then the fowl is slaughtered by slitting its throat with a knife as sharp as a scalpel. The meat is then donated to the poor.

The ritual is arguably more humane than the standard factory farming practices of cramming poultry in crates, hanging them upside down by their ankles, stunning them with an electrical charge, then cutting their throats and arteries, yet Orthodox Jews doing Kapparot are often singled out for public criticism and scrutiny.

The real difference between Kaparot and factory farming is that factory farming takes place behind closed doors, whereas Kaparot is usually performed in very public places, like the streets of Brooklyn and Queens.

Within the Jewish community Kaparot has raised such awareness. Last week, Israel’s Ashkenazi chief rabbi, David Lau, reiterated how Jewish law requires one to perform this ritual humanely without causing any unnecessary suffering.

Although this is a relatively obscure ritual performed by mostly Hasidic Jews, this practice has garnered national controversy with PETA calling for the banning of the practice and many rabbis even criticizing it, encouraging the use of money as an alternative to chickens.

Controversy around this practice does exist in Jewish law. Some rabbinic authorities encourage Kaparot while others forbid it because of alleged pagan roots or because of animal cruelty concerns. Nonetheless, thousands of Jews have been performing it for centuries.

The vast majority of people condone killing chickens for food in every other context. In the U.S. alone, more than 7 billion chickens are killed each year, many undergoing painful debeaking and suffering under abhorrent conditions.

Kaparot at least forces people to reckon with and appreciate the fact that animals are giving up their lives to sustain us. It forces us to recognize that chickens don’t come saran wrapped in grocery stores or in Kentucky fried chicken buckets.

Beyond selective claims of animal cruelty is also a disdain and intolerance for a revered religious ritual practiced by many Hasidic Jews. A ritual protected by the sacrosanct right to freedom of religion.

The end result of both factory farming and Kaparot is the same: chickens are killed to sustain people.

To be fair, those criticizing Kaparot under the guise of animal cruelty ought to be consistent in their condemnation and perhaps show some appreciation for the fact that the ritual annually puts mistreatment of chickens in the spotlight.

Eliyahu Federman writes on religion, culture, business and law at the Huffington Post. He is an executive at 1Sale.com.