« Photos: CGI Parksville’s BMD on Surprise Trip
It’s Hard to Be a Mensch at a Crowded Kosher Supermarket on Thursday Night » 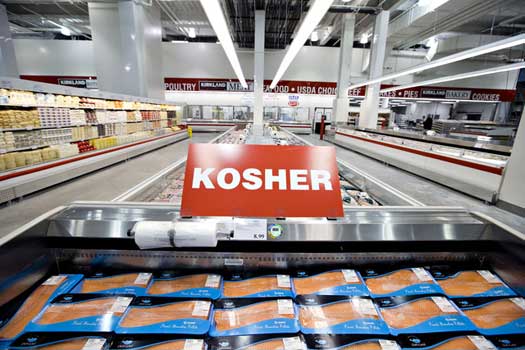 A battle to control the word “kosher” in Internet addresses is pitting Jewish groups against each other to determine whether a food prepared under ancient strictures should have a new marketplace online.

The Internet’s organizing body, called Icann, is meeting this week in the South African port city of Durban to begin a major expansion of domain names. That may include a decision on who can operate and license “dot-kosher” as a suffix for Web addresses, the same way “dot-com” and “dot-net” are used.

Five organizations have banded together to oppose the sole applicant for dot-kosher, Kosher Marketing Assets, saying it seeks to profit from a sacred tradition that shouldn’t be over-commercialized. The two sides, which both are in the business of certifying food as kosher, are at odds over how Internet users will find such products in the future.

“We think that if the term ‘kosher,’ which has important meaning in the Jewish religion, is commercialized, it will do a disservice to how religion in general should be treated and will harm the kosher public specifically,” said Harvey Blitz, the Kashruth Commission chairman of the Union of Orthodox Jewish Congregations of America, one of the five groups. The New York-based organization oversees OU Kosher, the world’s largest certification agency.

Products that are certified kosher include breakfast cereals like Kellogg Co. (K)’s Rice Krispies as well as traditional Jewish food like matzo. The size of the market for food deliberately bought because it is kosher is expected to reach about $17 billion this year, according to Packaged Facts, a market-research firm.

Exclusive control of the domain name could give its owner sway over the kosher supply chain, said Larry Finkel, director of food research at Packaged Facts.

Icann — the Internet Corporation for Assigned Names and Numbers — began accepting applications for generic top-level domain names, or gTLDs, in January 2012. In November, Kosher Marketing Assets, the OK Kosher unit, filed an application for dot-kosher, with a mission to “promote kosher food certification in general, and OK Certification and its clients in particular.”

While only clients who pass “rigorous certification” tests would be allowed to use the gTLD, OK Kosher said in its application it expected to have more than 600 licensees by its third year of operation. OK Kosher supervises products including Fruity Pebbles cereal and Maxwell House coffee.

Applying for a gTLD doesn’t come cheap, at close to $200,000 including the evaluation fee and legal services, OK Kosher’s Levy said in a telephone interview.

Blitz of the Orthodox Union, which provides kosher certification to items like Duncan Hines cake mixes and StarKist Tuna, said his group had no advance notice of OK Kosher’s bid and moved to block it as soon as it learned of the application. While it’s true his organization charges a fee for certification, “we got into this to make kosher food available,” not as a commercial pursuit, Blitz said.

“We were concerned by the language in the application,” which stated that a single agency would have the right to grant use of the kosher domain name, Avrom Pollak, the president of Star-K and also a rabbi, said in an interview.

A meeting between the two sides produced no agreement. OK’s Levy says he invited the groups to join his organization in overseeing the dot-kosher domain name.

“They weren’t interested,” Levy said. “They don’t have to become our partners, but they can’t now complain we’re trying to brazenly control dot-kosher.”

The dispute marks a departure from past cooperation. Individual ingredients comprising a food product, may, for example, be certified by any one of the organizations and then combined into one final product that is certified by only one.

The five groups have filed a formal objection with Icann and have also appealed to the new U.S. secretary of commerce, Penny Pritzker. Both sides have hired Washington lawyers to press their cases.

Both sides say they’re still hopeful their dispute can be resolved amicably.

“We wanted this to be low-key,” Star-K’s Pollak said. “We are not interested in having this become a major battlefield.”

« Photos: CGI Parksville’s BMD on Surprise Trip
It’s Hard to Be a Mensch at a Crowded Kosher Supermarket on Thursday Night »