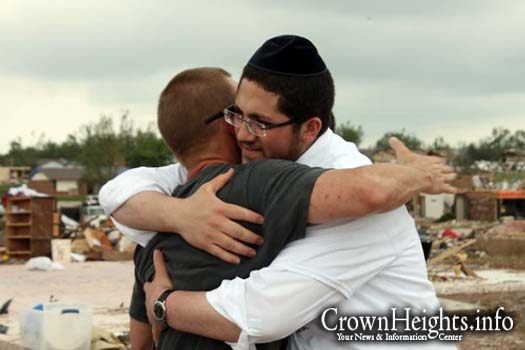 The Chabad Community Center of Southern Oklahoma, which is on the ground organizing relief efforts for the communities hit hard by last week’s devastating tornado, has received $15,000 in disaster-relief funds from the Orthodox Union. The funds were received just before the Jewish Sabbath, and are being distributed over the Memorial Day weekend and throughout the week.

“On behalf of those here in Oklahoma who will receive this help, my thanks go to all of the OU members and friends who were so generous in a time of real need,” said Rabbi Ovadia Goldman, director of the Chabad center, who said the money will be used for store gift cards and cash relief to area residents whose homes were destroyed.

Rabbi Judah Isaacs, director of community engagement for the Orthodox Union, said it aims to provide assistance in the face of such disasters and examine where other Jewish help can be found.

As word spread about the tornado’s tremendous impact and damage done to residential areas, businesses and personal property, the Orthodox Union sent a message to synagogues letting them know about the fund-raising effort. Then it connected to Chabad, which opened its own center as a shelter, and has been collecting and distributing supplies for displaced families and the elderly.

“I think we really reached out in a lot of ways to Chabad because we knew Chabad was on the ground really in force and helping people, and that was clear,” Isaacs said. “What we did is we sent funds that could be used for the gift cards that they’re handing out. And we knew that was something that needed to be done immediately.”

The OU’s appeal was posted on the national organization’s website, as well as on Facebook, Twitter and other social media. OU President Martin Nachimson welcomed the response from OU members and from others. He has asked for continued action from the community to help disaster victims, and said the organization will check in with Goldman over the course of the coming week.

“Both for Chabad and the Orthodox Union, these relief efforts constitute a true kiddush Hashem, a sanctification of God’s name,” said Nachimson, “and it is highly appropriate that we have transmitted these funds in the hours before Shabbat.”