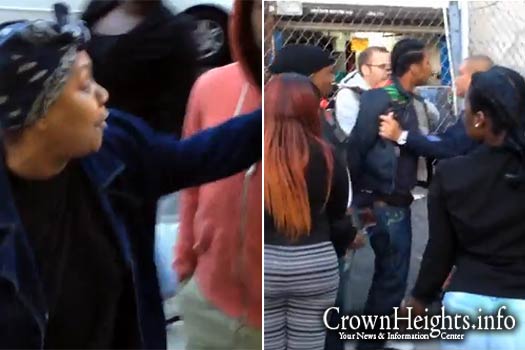 Tuesday night, just as Jews began celebrating the holiday of Shavuos, police officers were arresting two people for selling and buying illegal drugs just a few blocks away from 770. The incident then turned into a despicable racists rant by some of the residents.

The incident occurred on Tuesday, May 14th at around 8:30pm on Kingston and Atlantic Avenues – just 10 blocks away from 770. Anti crime police officers from the 77th Precinct busted one black male for the possession and sale of illegal narcotics, and another for purchasing and possession of the same.

Angry residents took to the street and shouted at police officers, protesting the arrests. Amid the unrest police arrested a third individual for Obstruction of Governmental Administration.

While most of the anger was directed at the police some residents took to accusing the “Jews” of their “problems”. “This aint New York, this is Jew York” shouted one woman, who went on shouting “those Jews are raping and murdering and [the police] doesn’t arrest them.”

The disgusting foul language tirade went on for nearly 5 minutes, until the camera stopped recording.

Due to the nature of the language we cannot post the video here on the site, but it can be watched on YouTube at your own discretion.