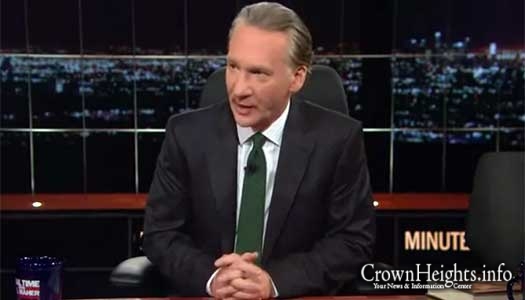 Bill Maher: “The Israelis are Controlling our Govn’t”

Bill Maher joined the chorus of conspiracy theorists this weekend, perpetuating the trope that Israel runs the U.S. State Department. During a debate with Jamie Weinstein, editor of the Daily Caller, and Donna Brazile, a Democratic Strategist, on Chuck Hagel, Maher was blunt in his “assessment.”

JAMIE WEINSTEIN, EDITOR AT DAILY CALLER: Just yesterday, there was a new speech that they believe in which during the question and answer [session] at Rutgers University, Hagel claimed that the State Department was controlled by the Israeli government. Israeli foreign ministry controls the government.

DONNA BRAZILE, DEMOCRATIC STRATEGIST: You see, Bill, what they’re doing is they’re going after every speech.

WEINSTEIN: Well, there’s two things wrong with that. One is that — it’s, you know, kind of suggesting Israeli power is controlling things. Number two, of all the branches of the government, the State Department being the most pro-Israel branch is ridiculous.

MAHER: Based on every statement I’ve heard out of any Republican in the last two years, the Israelis are controlling our government.

The statement received a round of applause from many in Maher’s audience, but as The Lid points out: “The crazy part of it all is that even in pro-Israel administrations the State Department has an anti-Israel history.”

Watch a video of the shocking episode below: