« Seven Years to the Murder of Efraim Klein HYD
Video: Nemo – In A New York Minute » 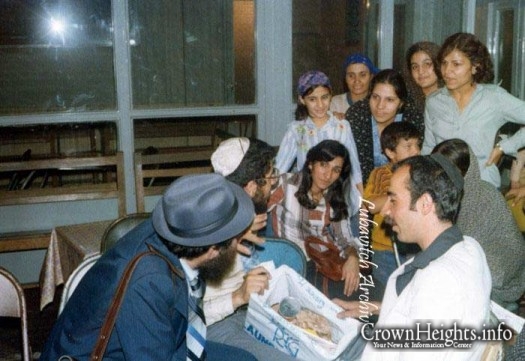 A group of Jews that were saved from Iran in 1978 by two Chabad students.

Spring, 1978. Two Talmudic students travel to Iran to meet with the leaders of the Jewish community there. The goal was to find ways of bringing Jewish books and services, kashrus supervision and teachers to Iran; and to help bring its Jewish population closer to their Jewish heritage by raising their level of observance.

Immediately upon arrival, the two emissaries got to work in Iran. They set up kosher catering facilities for the Jewish community, increased the hours of Torah study in the Jewish schools, and strengthened the level of Kosher supervision for the slaughter house in Teheran.

While there, in August of 1978, they became aware of the grassroots movement of protest against the policies of the Shah and the growing support for Ayatola Khomeini. As the frequent street demonstrations grew more violent, it was suggested that they should not travel to certain cities, because there was danger on the highways and the outlying cities were extremely dangerous.

In Teheran they met several high school and university students who expressed interest in coming to the United States on student visas to pursue their Jewish and secular studies, and they prepared the necessary paperwork.

Soon after, one of the Talmudic students, Rabbi Hertzel Ilulian, returned to Teheran during the holiday of Sukot to organize the first group of young men and women.

Because of the growing tension and fear in the community, it became evident that many more students would be interested in coming to the U.S. to study. The young emissaries therefore began to organize a system under which a large number of I-20 student visas could be issued.

While Hertzel was back in Iran, during October and November, serious rioting broke out and he was in actual physical danger. At that time, November of 1978, he was successful in returning to the United States with the first group of students. He also brought an additional list of students who requested I-20’s. Work soon began in earnest to arrange these visas and to make arrangements with the facilities and schools that would accept these students upon their arrival.

Rabbi Jacob J. Hecht of the National Committee for the Furtheracnce of Jewish Education received phone calls in the wee hours of the morning. Rabbi Dovid Shofet of Teheran? would report that during the rioting there was an overwhelming fear that the young men would be kidnapped to be conscripted into the army of the revolution and that young Jewish women would be violated in the streets. He pleaded with Rabbi Hecht to send as many 1-20’s as possible. This was no longer a question of emigration for the sake of studying, it was literally a question of saving lives.

Through the efforts of the NCFJE, over 1500 students were brought to the United States under Operation Exodus in 1978 and 1979.

« Seven Years to the Murder of Efraim Klein HYD
Video: Nemo – In A New York Minute »