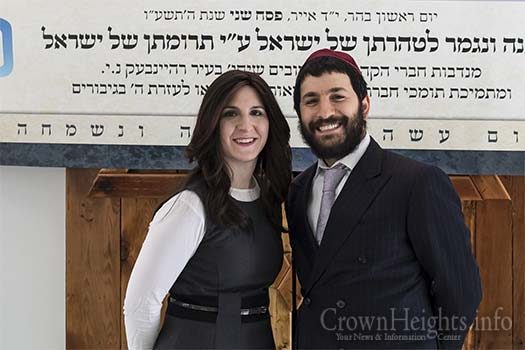 Camp Emunah has recently announced the appointment of new Executive Directors of the camp, along with a deep discount on summer camp tuition for Crown Heights residents.

Rebbetzin Chave Hecht, founder, and director of Camp Emunah announced the appointment of new management over all divisions of Camp Emunah.

Rabbi Hanoch and Tzivie Hecht, Shluchim to Dutchess County, New York, were recently chosen to serve as the Administrative Directors of Camp Emunah, including junior and senior divisions, teen camp, the sunshine bunk, the Emunah culinary camp and the traveling Shluchos camp.

“It is an incredible Z’chus to be part of the camp to which The Rebbe visited and showed such care and interest,” said Tzivie Hecht. “Emunah is the first camp in Lubavitch and was founded with the Rebbe’s direct attention. I’m humbled by the opportunity to be part of the team which will bring Camp Emunah to new heights.”

The administration and along with the dedicated staff is launching a new array of initiatives for the summer, that will continue to innovate the camp experience for the kids, staff, and families.

Earlier Camp Emunah annouced “Campaign 660”, a deep discount on camp tuition for residents of Crown Heights. Instead of the $2,000 per season rate, they are offering it for $660 per season. The campaign is being launched in honor of Camp Emunahs 66th year and is available to kids in from grades 4, 5, 6 & 7 – and to the first 66 that register.

Camp Emunah is entering its 66th year, attracts campers from around the globe and has several thousands of alumnus all over the world. The Camp was founded in 1953 by Rabbi Jacob “JJ” and Rebbetzin Chave Hecht. Originally started as a summer option for the girls of Released Time, the Camp was launched as the very first orthodox Jewish overnight camp for girls in the Catskills.