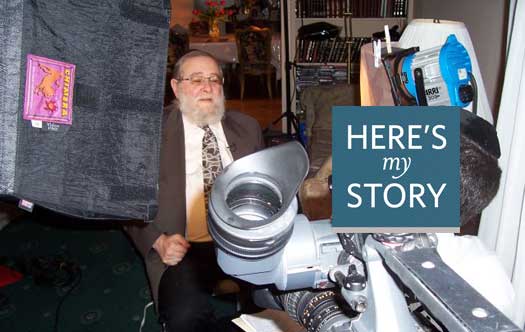 Here’s My Story: ‘Send a Telegram to My Father-in-Law’

I was born in Paris, France, and the Rebbe and the Rebbetzin were the kvatters at my bris. That is, they carried me to the circumcision ceremony when I was eight days old.

Of course, at that time, the Rebbe was not yet Rebbe. The Rebbe Rayatz was the Rebbe of Chabad Lubavitch at the time. He was living in Otwock, Poland, having been exiled from Russia by the Communists. This was in the 1930s before World War II broke out.

The Rebbe had married one of the Rebbe Rayatz’s daughters, Chaya Mushka, and the two of them were living in Paris. The Rebbe was very close to my father, Laibish Heber, as they had known each other back in Russia. At that time, there weren’t too many Lubavitcher chassidim in Paris and so they naturally gravitated toward each other.

My father had set up a business in Paris in which he was very successful. The Rebbe was a student at the time and of modest means. My father saw that he had rented an apartment in a hotel that was called Max – it wasn’t actually an apartment, but a studio, just one room that was both a bedroom and a kitchen. This made my father upset, because it was not fitting for the Rebbe and the Rebbetzin. So he rented them a nice apartment and decorated it, and he went to see the Rebbetzin to tell her about it. Her response was, “I have to discuss it with my husband.”
Later, she told my father the answer, “I talked it over with him and he feels that we should stay over here.” And that little studio was the apartment they lived in for many of the years they were in Paris.

During the years that they were in Paris – my father told me this – the Rebbe tried to hide his identity. He begged my father not to tell anyone that he was the Rebbe Rayatz’s son-in-law. And on one occasion, Rav Yoel Leib Hertzog – the father of Rabbi Yitzchak halevi Hertzog who later became the Chief Rabbi of Israel – came to visit Paris. He met with my father and my father invited the Rebbe along to the meeting. They started discussing Torah and learning together. And Rav Hertzog asked my father, “Who is this young man that knows so much?” My father said, “Oh, that’s somebody who just arrived from Poland.”

They continued talking, and when the meeting ended, Rabbi Hertzog again asked my father who this was. And my father said, “Now is not the time to talk about it.”

These were hard years – the Nazis had invaded Eastern Europe and all sorts of terrible things were happening. And my father saw that the Rebbe was extremely distraught; he looked very pale and very tired. So he went to the Rebbetzin and he said, “You know your husband is overworking himself. He is driving himself to the point of exhaustion. I think it would be a good idea for him to take a little vacation.”