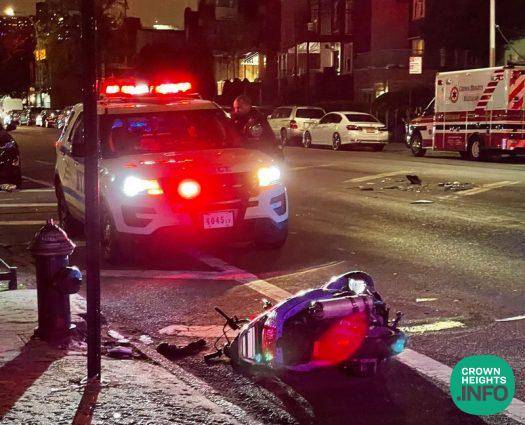 Two men riding a moped on Empire Blvd were thrown Monday evening after colliding with a car near the intersection of Empire Blvd and Brooklyn Ave.

According to witnesses, the car had been in the middle of making a U-Turn near the Hatzalah Ambulances parked on Empire Blvd around 8:00pm, when the moped with two riders accelerated, striking the front of the car.

In the chaotic moments of the crash, the two riders were thrown from the moped as it was caught under the car and dragged across the street.

Hatzalah and Shomrim were called, providing aid to the injured riders while redirecting traffic and keeping the scene calm.

The police arrived and took a report on the incident.

Thankfully, none of the injuries appeared to be life threatening.