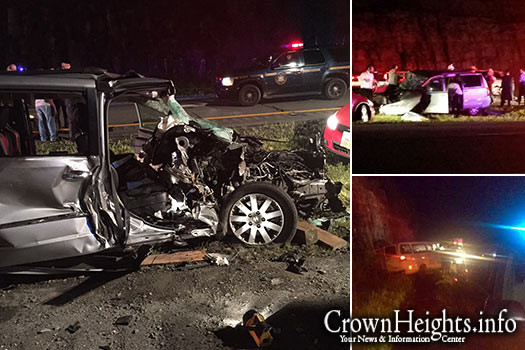 A Crown Heights family, on their way upstate for Shabbos, was involved in a very serious crash on NY Route 17 near exit 113 late last night. A total of Six were injured, four of them seriously including two children.

The crash occurred at around 12:15am on New York Route 17 between exits 114 and 113 in the Catskill Mountain region. Two vehicles, a 15 passenger van and a Chrysler Town and Country minivan were involved.

According to sources the 15 passengers van was stopped in middle of the busy highway – possibly due to a breakdown – and was rear-ended by the minivan, sending both vehicles into a ditch.

Dozens of Hatzalah volunteers and nearby fire department companies were on the scene and had to cut into both vehicles in order to free the pinned injured – one of the victims took over 45 minutes.

The public is asked to say Tehillim for: