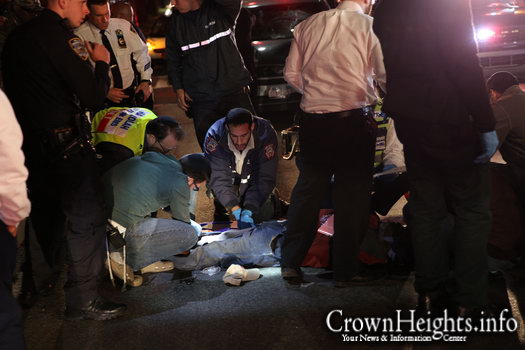 A man was left in critical condition after being struck by a minivan when he attempted to cross Eastern Parkway.

The incident occurred at around 8:00pm near the intersection of Nostrand Avenue and Eastern Parkway. Multiple eyewitnesses stated that the victim, a man in his 40’s, attempted to cross the busy thoroughfare outside the crosswalk and simply ran into traffic.

A minivan driven by a Jewish man struck the victim, flinging him some 20 feet away from the vehicle. Multiple rescue agencies responded, with the first being Hatzalah, who made a Kiddush Hashem by giving the victim emergency aid well before EMS arrived on scene.

The driver, who was not from the area, was frightened by the large crowd that formed and called Shomrim out of fear for his safety. Shomrim in turn notified the NYPD and together multiple officers and Shomrim volunteers arrived on scene, directing traffic and making sure the crowds stayed calm.

Hatzalah transported the victim to a local hospital, where he is being treated for injuries to his legs, shoulder, back and head.