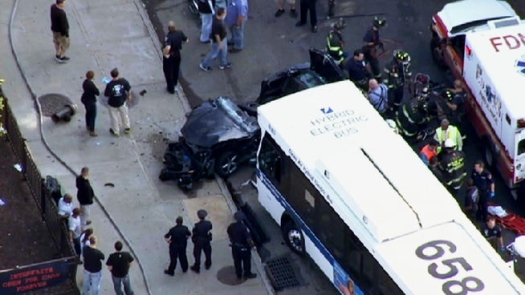 About 43 people were injured — one critically — when a car fleeing police collided head-on with a city bus after running a stop sign at on Albany Ave. near Atlantic Ave. at about 4:30pm today (Monday).

The crash happened after cops from the 77th Precinct chased two men in a black Camaro after one of them flashed a gun at an officer.

The bus sideswiped the car after it ran a stop sign at the Bed-Stuy intersection, police said.

Most of the injuries were minor, according to the FDNY, but one passenger was taken away from the scene in critical condition.

“The bus driver was in bad shape,” said Joette Bryant, 45, who lives on the block. “They had to take him off on a stretcher.” She said that they put an neck brace on the driver before taking him away.

An MTA spokesman could not confirm the driver’s condition Monday night.

Battalion Chief Mike Breslin said that the two men were pried out of the Camaro using a large hydraulic scissors known as “the jaws of life.”

Police handcuffed one of the men to a stretcher before he was loaded into an ambulance, witnesses said.

“They took one guy out and cuffed him right away,” said Dewayne Richards, 33, who saw the aftermath of the crash.

Bryant said she saw the entire accident unfold. She said she witnessed an unmarked police car with a light on top, pursuing the Camaro eastbound on Herkimer Street.

The car tried to beat the southbound B15 bus through the intersection of Albany Avenue and Herkimer Street when the two collided, said Bryant.

“The bus tried to swerve from hitting him,” she said. The impact of the crash sent the Camaro spinning around and up onto the sidewalk, Bryant said. She too saw police handcuff the driver to the gurney.

Most of the passengers suffered head, neck and back injuries, FDNY Emergency Medical Services Deputy Chief Alvin Suriel said. They were taken to Kings County Hospital and St. Johns Hospital, he said.

Witnesses said that about half a dozen children were also on the bus, but express relief that on this first day of school that more were not injured.

“They picked the wrong street to come zooming down, there’s a lot of kids [on this block],” Bryant said.