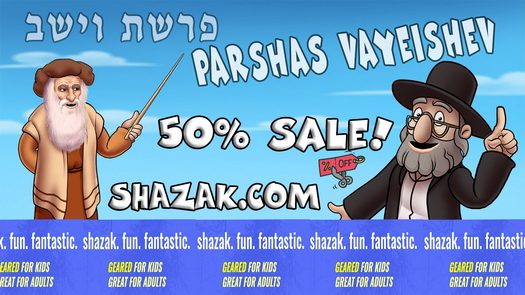 Yosef and the Amazing Dreamcoat

Rabbi Yaakov Isaacson has recently made a stunning cloak for his son Yosef. Expertly designed using the Pasim method, and containing a vast array of colors, this cloak has already attracted the envy of Yosef’s brothers.

A torn and bloodied suit of clothes sized to fit a teenager has been identified as belonging to 17-year-old Yosef Jacobson. The tattered garment is the only item that has been recovered since the boy’s disappearance.

Speculation has grown that the missing lad was attacked and killed by a wild animal. Yosef is survived by his father, a twin sister, one brother, and ten half-brothers.

The wife of one of Egypt’s wealthiest businessmen, Mr. Potifar Seris-Paraoh, has accused their head manager, Mr. Yosef Ivri, of terrible crimes.

The accused, who is awaiting trial, is jailed at the Royal Egyptian Prison. “I never saw this coming. He was the best and the brightest,” said Mr. Seris-Paraoh. “But when your wife says he’s gotta go, he’s gotta go. No two ways about it..”

In a stunning turn of events, both the royal baker and butler were demoted and thrown into prison after they were caught serving Paraoh horrendous products. A fly was found in the evening wine, and a stone in the breakfast bread.

These unacceptable mistakes did not go unnoticed by the royal staff and the longtime familiar faces are no longer seen around his majesty’s kitchens and wineries.

“I am not at liberty to discuss details of this disgusting debacle,” remarked an official palace official, “but after Paraoh was served those rolls, someone’s head will definitely roll.”