« Demonstrators Flood Downtown Brooklyn and “Take Over” Subway
After Israeli Plea, US Cutting $105 Million in Military Aid to Lebanon » 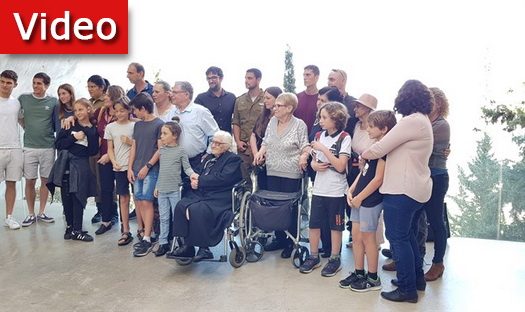 On Sunday, Yad Vashem, the World Holocaust Remembrance Center, and The Jewish Foundation for the Righteous co-hosted a reunion between Holocaust survivors from Israel Yossi Mor (previously Yosef Mordechai) and his sister Sarah Yanai, and their wartime rescuer Melpomeni Dina (née Gianopoulou) from Greece.

The Mordechai family lived in Veria, Greece where Mentes Mordechai owned a thriving fashion business together with his wife, Miriam Mari. Miriam also gave sewing courses to women in the town. The Jewish couple had five children: Sarah (b. 1933, later Yanai), Asher (b. 1935). Shmuel (b. 1938), Rachel (b. 1940), and later another son, Yosef (Yossi), who was born during the war in 1942.

In 1940, when the war between Italy and Greece broke out, Mentes was drafted into the Greek army to fight in Albania. The family’s economic situation deteriorated, and Mari tried to make ends meet by knitting for the army. Eventually, Mentes returned home, but when the Germans occupied Greece in 1941, the persecution of the Jews began. Jews were marked with a yellow star, and soon rumors spread about deportations to labor camps. Mari had relatives in Germany, who sent a coded letter. They wrote that they were well off, but added that the situation of their grandparents “was even better.” Knowing that the grandparents were buried in the cemetery in Thessaloniki, the family understood that this was a warning.

Meanwhile, Evlambia Tokatlido, who had worked as a maid for the Mordechai family, had found work as a helper and concierge in a local school near the Mordechais’ house. When Mari’s babyYosef was born, Mari wasn’t able to nurse the baby. Evlambia, who had given birth to a baby girl around the same time, nursed him herself, and even offered to take him to her home and raise him with her own baby. However, it was too difficult for Mari part from her child, so Evlambia came regularly to the Mordechais’ home.

In March 1943, Jews in nearby Thessaloniki began to be rounded up for deportation. Evlambia’s brother, Nikos Axiopoulos, took it upon himself to get false identity cards for the Jewish family, and left Veria by night, taking a circuitous route to Thessaloniki. Nikos hurried back to warn the Mordechai family that a transport was scheduled in the next few days, stopping in Veria to collect the Jews there. Nikos and the rest of his family were determined to help the Mordechais. A carpenter by trade, Nikos built a wooden ceiling in the attic of the old abandoned Turkish mosque, where he was living with his family, with a space for the Jewish family to hide. They moved there around Passover 1943. For almost a whole year, the Mordechai family took refuge in the attic. While in hiding, they heard the screams of the Jews of Veria being rounded up. The conditions in the cramped hiding place were very difficult, with neither ventilation nor windows.

Nikos and Evlambia’s sisters Polixeni Axiopoulos and Makrina Ananiadou (Axiopoulos), along with their brother Petros Axiopoulos, also contributed to the welfare of the Mordechais, and shared their meager food rations with them. Eventually, the Mordechais developed health problems, and they realized that they needed to find a new hiding place. This time, it was Efthimia Xanthopoulou who helped the family. Before the war, Efthimia had studied to be a seamstress at Mari’s studio. Since she was very poor and an orphan, Mari had not charged her for the lessons. Efthimia became quite attached to the Mordechais, and visited them regularly after they went into hiding. Now, she arranged for them to move to her home, where she lived with her two younger sisters, 15-year-old Bithleem (later Sumbasi), and 14-year-old Melpomeni (later Dina). There, in one room, she accommodated seven members of the Mordechai family. The three sisters shared their food rations with the Mordechai family and sheltered them, despite the risk. As food supplies were scarce and very expensive, Bethleem and Melpomeni cultivated a piece of land they owned in a swamp near Yiannitsa, a short distance from Veria. When Bithleem returned from working the land, she would carry on her back a sack with provisions for ten people.

One day, Shmuel became very ill. Bithleem took him and his sister Sarah to the hospital, but the child sadly died.

Shortly after the Jewish family was denounced to the authorities, relatives of Efthimia helped them to escape. The eldest daughter, Sarah, was taken out of the town to the woods, while Asher escaped on his own to the mountains. In the meantime, Mari took her youngest children, Rachel and Yosef, and set out on foot to look for a place to hide. Bithleem and her sisters supplied the family with clothes, appropriate for hiding in the mountain area of Vermio. Prior to the end of the war, the family reunited and managed to survive until liberation.

« Demonstrators Flood Downtown Brooklyn and “Take Over” Subway
After Israeli Plea, US Cutting $105 Million in Military Aid to Lebanon »