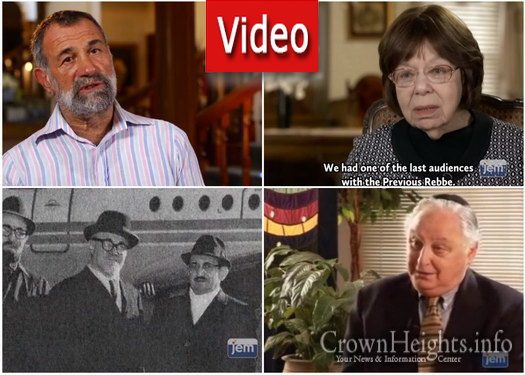 Nittel Nacht means you can’t learn, but you can still spend your time productively.

Every week, JEM publishes a new video of an individual’s unique encounter with the Rebbe. Here we present a collection of 11 specially selected stories – each one, through another person’s eyes, describing how their lives were touched by a meeting with the Rebbe.

The Meaning of Love

The Rebbe explains the true meaning of love to a young woman beginning to date. Not the stuff of novels and stormy passion, but…

“I Can Only Give You the Match”

Yehuda Avner served on the personal staff of five Israeli Prime Ministers. In 1977, after meeting with President Carter at Camp David, Menachem Begin sent him to report to the Rebbe.

I Kept Waiting for an Answer from the Rebbe

Rabbi Shmuel Rodal has served as a Chabad emissary, educator, and rabbi of the Beth Shlomo Synagogue in Milan, Italy, for close to fifty years. In the mid-1960s he was a student in Yeshiva Tomchei Temimim in Kfar Chabad, Israel.

Henny Karniel is a veteran educator living in Kfar Chabad, Israel. In 1975, as she was about to return to work after taking time off on maternity leave, she was approached with a particularly challenging job offer.

After the Rebbe encouraged her to go ahead, she accepted the position. She saw immediate results, but it was only many years later that she found out what a big difference her efforts had made.

As a young man, Rabbi Fishel Jacobs came with his mother for a private audience with the Rebbe. In his innocence, he brought along a tape recorder and recorded the meeting that changed his life.

Rabbi David Hill headed the National Council of Young Israel from 1961 to 1965. Responding to a request from Prime Minister Golda Meir, he established Operation Lifeline, an organization to help provide assistance for Soviet Jewry. In turning to many Jewish leaders for help, he had a series of meetings with the Rebbe. It was during one of these meetings, that he received the information that he was seeking.

Like all parents, the Landbergs were very excited when their first son was born. Their joy was short lived when though, when their child was blinded by a nurse’s malpractice. Frightened by the prospects of their child being blinded for life, on the advice of their doctor they petitioned the Rebbe for a blessing. Just one week later, they received an excited call from the doctor.

When The Rebbe Requested A Favor

For years, Rhoda Friedland was not able to have children. In 1950 – acting on their Rabbi’s advice – she and her husband visited the Previous Rebbe, Rabbi Yosef Yitzchak Schneersohn, to seek a blessing. After the Previous Rebbe’s passing, with the blessing yet to materialize, she turned to the Rebbe for help. While the Rebbe sent her to numerous doctors for medical advice, he insisted on one thing throughout her ordeal: If the Previous Rebbe promised, then so it would be.

Overwhelmed by mounting questions about his work in the rabbinate and Jewish outreach, as well as in his business, Rabbi David Lapin sought advice from the Rebbe.

On the Straight and Narrow

In 1976 a young high schooler in Crown Heights felt the need to push back against the expectations and strictures of life as a Lubavitcher girl. The Rebbe’s sensitivity and approach to her predicament remain as topical and incisive now as ever – truly a guide to the perplexed. Today Mrs. Mariashi Groner is the Co-director of Lubavitch of North Carolina and the Director of Charlotte Jewish Day School.

Someone Opened the Light

In 1973, Mr. David Stauber accompanied his wife and father-in-law to an audience with the Rebbe. Although he thought he had no personal interest in the meeting, he came out a new Jew.