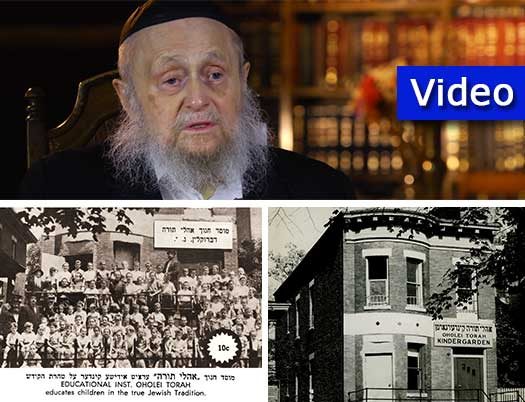 In connection with the conclusion of Shiva for Reb Mendel Morosow OBM, Oholei Torah’s archive offices is sharing a short clip of a historic interview that took place just a few years ago. It gives a glimpse into the direct involvement and guidance the Rebbe gave throughout the early years, which led Oholei Torah to such tremendous growth and success.

Reb Mendel tells how his close friend Reb Michoel Teitelbaum, co-founder of Oholei Torah, began the school with the hiring of Reb Eli Chaim Roitblatt as a teacher for a young group of boys, and at the Rebbe’s request, each year another grade was opened, until Oholei Torah grew into the empire it is today.

An amazing fact was revealed during the interview. In the early years, as Oholei Torah grew, so did the expenses. When Reb Michoel approached the Rebbe about the lack of funds, the Rebbe told Reb Michoel, “Ayerhe Tircha Uhn Mine Gelt”, [your toil and my money], and in fact, the Rebbe secretly paid whatever deficit there was!

Ultimately, the merit of supporting Oholei Torah was taken over by Reb Dovid Deitsch, of New Haven, CT, who became known, together with his wife Sara, the Mameh and Tatteh of Oholei Torah. And today, many of anash have undertaken the support, sustaining Oholei Torah as it is proudly the Flagship school it is today.