« The Great American Jewclipse
8:00pm: How to Explain Death to Children » 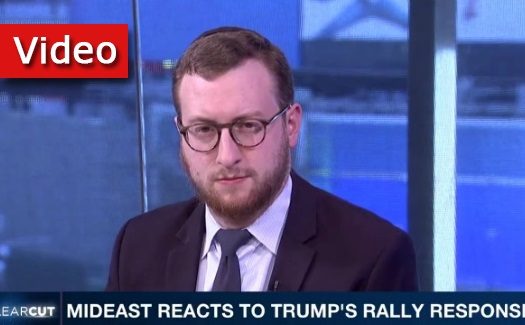 When it comes to condemning neo-Nazis, the KKK and other far-right groups, there is “no room for equivalency,” the editor-in-chief of The Algemeiner, Dovid Efune, said during an i24 News interview on Wednesday amid the ongoing controversy surrounding President Donald Trump’s response to last weekend’s violence in Charlottesville, Virginia.

“These people have to be hammered down to the margins of society,” Dovid Efune told “Clearcut” host Michelle Makori.

However, Efune pointed out, some of the criticism Trump has been on the receiving end of this week has been politically motivated.

Efune also called for greater scrutiny of the far-left, particularly “those that would like to deny the Jewish right to self-determination.”

Watch the interview below:

Despite opportunism, hypocrisy in criticism of #Trump, there's no room for equivocation in condemning Nazis, @Efune tells @MichelleMakori pic.twitter.com/icDs286Mak

« The Great American Jewclipse
8:00pm: How to Explain Death to Children »