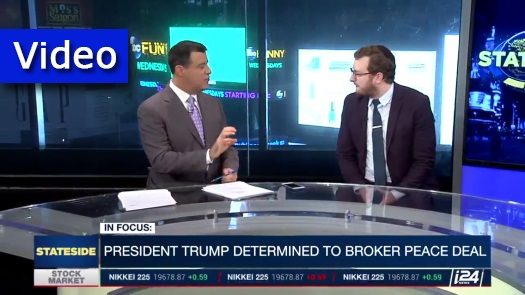 President Donald Trump’s effort to get the Palestinian Authority to stop giving money to jailed terrorists and their families will expose the “duplicity” of PA leader Mahmoud Abbas, the editor-in-chief of The Algemeiner, Dovid Efune, said during an i24 News appearance on Monday, during which he debated Omar Baddar of the Arab American Institute.

“What President Trump has brought to the table that previous presidents have not brought to the table is an insistence on the Palestinians that their rewards for the terrorists that have perpetrated these types of attacks — paying salaries to terrorists in prison — are not acceptable,” Efune told “Stateside” host David Shuster, shortly after the news broke of a deadly suicide bombing at an arena in the British city of Manchester.

“Stopping payments to terrorists has never been done before,” Efune noted. “And I’ll go a step further. It’s not possible. It’s ingrained in Palestinian society. President Abbas does not have the power to do that. And President Trump’s insistence on that is going to show him up.”